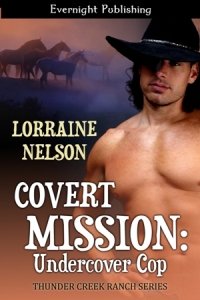 She meets Blake through her good friend Zakia and they automatically have chemistry, but Sam is not looking for any kind of commitment or the complications associated with "relationships". Blake is every woman’s dream-tall, dark, and handsome cowboy but she tells him from the get go she only wants to be friends.

When Blake first sees Sam getting out of her Chevy Tracker he knew that she was the woman for him, he does not see her as anything but a beautiful woman and discovers right away that she is as prickly and independent as they come. Sam keeps telling him over and over again that she does not do relationships, but he wants more than "just friends" and he's willing to wait and bide his time for her to come around and see that he doesn't see her prosthesis, just as a sexy woman.

When Zakia's stalker escapes and comes after Samantha, she comes to understand that Blake is there for her and what he is willing to sacrifice to keep her safe and yes, protect and help her. Can Sam overcome the feeling she has of being less than a whole woman and when she tells Blake everything that she lost in the army will he still want her and think that she is the woman for him and give him everything he wants and deserves.

Lorraine Nelson's writing takes you along with her and the love her the characters at Thunder Creek. You have moments to where you want to either shake Sam or hug her for everything that she has gone through. She makes you dream about your own Blake, and that not others always see us the way we see ourselves.

Lorraine Nelson on the web:  http://lorrainenelson.wordpress.com/
Lorraine on Facebook: http://www.facebook.com/profile.php?id=100000258976159
Posted by Kimberly Rocha at 5:19 PM