TO SIN WITH A VIKING by MICHELLE WILLINGHAM 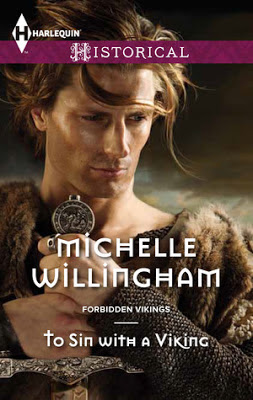 Caragh O' Brannon and her people are starving. Famine has brought her family and those around her to their knees. When the enemy lands on their shores, Caragh's brother is determined to take whatever they have on  their ship to survive, even if it means his end.

Viking warrior, Styr Hardrata has landed on Ireland's shores to attempt to revive his failing marriage. His wife, Elena's inability to give him a child has made her resentful of him. They were thrown together at a young age and five years into the relationship, both Elena and Styr are fighting a losing battle. When their ship is attacked upon landing, Styr fights to save Elena from being taken prisoner by the Irish. Instead, he finds himself in chains and prisoner to the starving waif, Caragh and his ship, along with his wife and men, gone.

Once Styr awakens in chains, he sees that Caragh's situation is dire. She is weeks away from expiring of hunger.While showing Caragh how to take control of her destiny, Styr begins to feel a swell of emotions for Caragh, emotions her never felt before, even for his own wife Elena. Styr knows he must stay true to his wife. He must find her and make sure she is safe and secure, but Caragh plagues his every waking moment.
When Caragh's older brothers return from foraging for supplies and find Styr in their only sister's companym they are suspicious of the situation.

Soon, the brothers set off with Styr and Caragh in search of Caragh's brother and Elena, but danger strikes when the Danes attack. Will Caragh and Styr achieve their goals? Will Caragh be left behind when and if Styr is reunited with Elena? These questions and more are answered in Michelle Willingham's newest  fast-paced romantic adventure, To Sin With a Viking.

To Sin With a Viking, the first book in Michelle Willingham's Forbidden Viking series is a great start. Styr's flailing relationship with his life is real, whether it is 875 AD or 2013. How he chooses to deal with it makes this story all the more interesting. This is the first book by Michelle Willingham that I have read and it won;t be the last. I was pleasantly surprised by To Sin With a Viking and I think other readers will be as well.

Posted by Kimberly Rocha at 3:53 PM