ONCE SHE WAS TEMPTED (HONEYCOTE #2 ) by ANNE BARTON 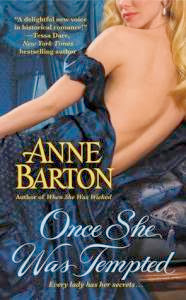 There was a time when Daphne Honeycote didn't know where the funds would come from to pay for her mother's medication. Those were difficult times. Times for desperate measures. While her sister Anabelle worked her fingers to the bone as a seamstress and sometime blackmailer to help out, Daphne's solution was to pose scantily clad for her artist friend, who needed a model for paintings that were commissioned by a gentleman of the ton.

Now, some time later, Anabelle since married to a Duke and the family's situation much improved, along with their mother's health, Daphne's solution comes back to bite her in that one time scantily clad arse. When Benjamin Elliot, the earl of Foxburn approaches Daphne and tells her to discourage a would-be suitor who has designs on her, she is shocked and dismayed to find that Lord Foxburn is in possession of one of the two paintings that she sat for. Denial does nothing to detain the cynical and ailing earl from his task, until he finds there is a second painting out there somewhere and tells Daphne.

Daphne Honeycote is now frantic. While she was never ashamed of the paintings, should they become public and it known that the sister of a duchess  posed semi-nude for a painter, her family would be ostracized  by the ton. Daphne would not be able to take that, for she adores her family. Against her better judgement, Daphne elicits the help of Benjamin Elliot to locate the second portrait and in the process the two seemingly unsuited pair fight to keep their budding attraction to themselves. Although it is unlikely that anyone close to the beautiful lady and the brooding war hero would even think they had anything going on, or would they?

When the second painting shows up in the hands of the spoiled rake son of the man who commissioned the portrait, Ben and Daphne toil to recover it before it can be displayed for all of London to see and auctioned off to the highest bidder therefore ruining Daphne and her family's name.

Once She Was Tempted by Anne Barton is a great follow-up to When She Was Wicked and the novella, To All the Rakes I've Loved Before. A family overcoming such adversity and still coming out ahead of the game after such mishaps, but ultimately learning from these mishaps. I love the fish out of water stories and the gentlemen who know exactly how to treat these non-conformist women. Anne Barton has a unique way of setting up her heroes and heroines so that their feelings just jump out at them and shock them into submission. I look forward to more Honeycote novels and anything else that Miss Barton writes for that matter. 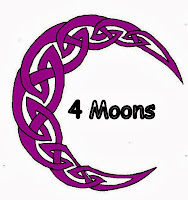