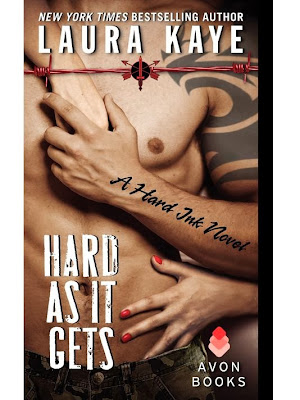 Hard as It Gets is a good start to a new series.

Becca Merritt is currently searching for her missing brother Charlie. It has been several days since she last spoke with him and the only information she has is a note from him instructing her “to find Rixey, the Colonel’s team, Hard Ink Tattoo”. With not much else to go on Becca hopes to find Rixey and enlist his help to find her brother. Becca wasn't anticipating meeting Nicholas or the feelings he sparks in her.

Once Nicholas reads the note from Charlie and realizes that Becca is his former Commander’s daughter he wants nothing to do with her. He sends her away, refusing to help. Guilt sits in pretty quickly so he decides to track her down and see about helping her. Nicholas soon realizes that Becca’s brother Charlie is in a load of trouble. Charlie may have also stumbled onto information that can help Nicholas and his former team mates. Nicholas calls in his former Army team mates to investigate further and hopefully clear their names. As they dig deeper into Charlie’s disappearance

Nicholas has got the brooding, alpha male down pat.  He is one HOT man. I was definitely drawn to him not only for his looks but because of what happened to him. Nicholas Rixey is a retired (not by choice) military who was discharged after an incident overseas. He was seriously injured and came back home to recuperate. He is currently a silent partner in his brother’s tattoo shop called Hard Ink Tattoo and occasionally tattoos there. He also has a process service job (delivers papers) which is his steady job and provides him with a steady income.  Both of these careers were not chosen by him and he is feeling restless. Ever since he had to leave the Army he is struggling with what to do with his future.

Becca is a little sweet…and a lot tough. She refused to be left out of the search for her brother and so she takes an active role in it with Nicholas and his team. I felt for her because of everything she went through with her family, it seemed like one tragedy after another. Becca has to come to terms that her father is not the man she thought he was but through it all she perseveres and doesn't give up. Together Becca and Nicholas make a great couple. They have some really serious chemistry and they definitely scorch the sheets.

I have been eagerly waiting for this book to come out. I was immediately snagged by its super-hot cover and the book blurb on the back. Having read the book I am a tad disappointed because what I thought I was getting…a hot sexy tattoo artist…I didn't feel came through as much as I would have liked (remember this is what I feel). Don’t get me wrong I think it’s a good story, it just in my opinion I really didn't feel that Nicholas was a tattoo artist as much as he was a military man. He says it in the story at least twice that he does tattoo’s occasionally. Besides that I really did like the story. There is a lot of action in the story and suspense as Nicholas, Becca and his team tries’ to find Charlie.

I found his brother Jeremy really funny (loved his shirts) and I hope he and the rest of the team get books of their own. And sweet Eileen the three legged dog was just adorable. Hard As It Gets set things up nicely for the continuation of the Hard Ink Series as Nicholas and his team as they continue to investigate what happened in Afghanistan. I am looking forward to the next book. 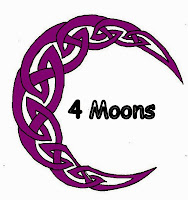