UNDONE BY HIS KISS by ANABELLE BRYANT THE BLOG EVENT! 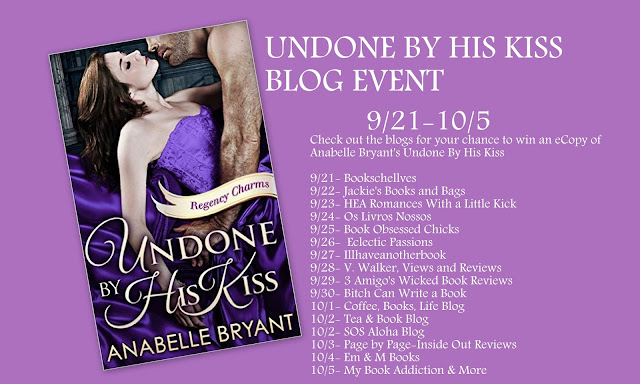 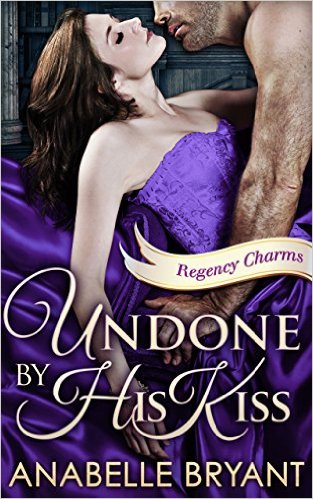 A most delicious challenge…
Experience has taught Emily Shaw that men are best avoided, so she’s determined to take her place in society alone and unrestrained by marriage. Renting a room in the heart of London, she establishes a Women’s League to promote equality between the sexes and teach women to be independent.

Jasper St. David isn’t looking for distractions, but he’s fascinated by beautiful, fiercely opinionated Emily when she moves into the office above his. And when he learns of her determination never to succumb to male charms, he can’t help but see it as a challenge! After all, Jasper’s always found nothing more tantalizing than the thrill of the chase...

Undone By His Kiss
Excerpt 1
She was a beauty, no doubt. All fluster, indignation and tempting female. Her nose tipped up at the end and the fitting observation caused him to smile. Miss Shaw struck him as a female who turned her nose up on a great many things.
He was an easygoing sort. Why he’d become obsessed with a stranger who appeared as relaxed as a wasp’s nest proved baffling. He had more important subjects to consider and the distraction of a lovely female was the last thing he desired, never mind he’d had trouble chasing her memory from his thoughts all day. Still, she fascinated him for some illogical reason. He’d watched her mouth form every word, captivated by her lips, perfectly heart-shaped, plump and kissable, and instead of comprehending her message, he wondered of the taste of her kiss, the feel of tongue.
Terribly done of him, really. Miss Shaw appeared less than interested. Her back had been rigid, her shoulders squared, yet she really was all soft skin and feminine curves.

Excerpt 2
His mouth found hers with uncompromised precision, lost in the glory of her adamant return. Her fingers slid through the hair at his temples, locking him to her in an expression of eager participation that made his heart pound and his cock ache. She tasted like a dream, an ambrosial combination of feminine sweetness and forbidden fruit, the freedom he yearned for and the divine fantasy he’d conjured, united in the hot slick rub of her tongue against his, the petal-soft press of her mouth against his jaw, his chin, his cheek. She rasped some delicious little noise, a murmur in the back of her throat, an entreaty for him to pleasure her, and he supplicated with fervor, dragging his mouth across her cheekbone to find the delicate shell of her ear where he whispered all the wicked thoughts kept buried in his heart.
She stilled. Perhaps he’d revealed too much, offended her refined gentility. His pulse hammered, while he waited, his breath hard and fast. Then her lips found his, her tongue next with a timid caress of his lower lip, licking, tasting his mouth to continue their kiss until all thought became impossible, obliterated by the thrum of passion and urgency and need. He pressed her against the velvet bolster, his shirt against her dress little barrier to the soft skin she hid beneath. Her fingers twined in the braces at his shoulders, as if lifelines to anchor her, the threat of their passion enough to sweep them away.
He wanted to strip her bare, discover every inch from neck to navel, to tell her she’d answered the silent prayer he hadn’t known lived in his soul. To drive into her delicate honey-sweet sex and make her his alone. He fought the desire with all the strength he owned. 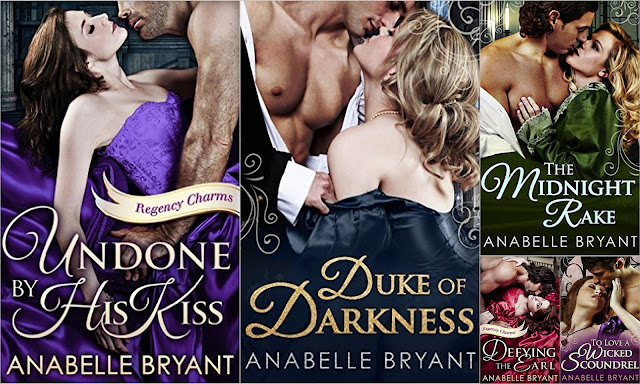