First let me start off by saying sorry guys for being MIA for awhile. My house has been a mad house the last couple months. Between going to the gym 4 days a week which i am proud to announce i have lost 20 pds and 31.5 inches off total body. Between that and my kids playing baseball/softball that all my time has been devoted to those two things and now a new boat we have bought. But hey i have one killer Tan going on lol. Now baseball season is done till fall so i will hopefully be able to catch up on all the books i have read over the last couple months. So here is the one i finished today. ~JOEY~ 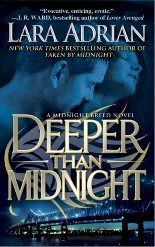 Deeper than Midnight Book 9 By Lara Adrian was a great read. I really enjoyed this book. This is one series you don't want to miss. Hunters book will drawn you in and make you like him even more. The only down fall i found to the book was i wanted to know so much more about Hunter and Corinne that i hope will be answered in the next book. To see this man open up after all these years of being like a machine was great to read, Your heart broke for him. So go pick up this book you don't want to wait. If you haven't started the series then go get it now because this is one series you wont be able to put down. I promise!! ~JOEY~

From the back cover:


Delivered from the darkness, a woman finds herself plunged into a passion that is DEEPER THAN MIDNIGHT . . .
At eighteen, Corinne Bishop was a beautiful, spirited young woman living a life of privilege as the adopted daughter of a wealthy family. Her world was changed in an instant when she was stolen away and held prisoner by the malevolent vampire Dragos. After many years of captivity and torment, Corinne is rescued by the Order, a cadre of vampire warriors embroiled in a war against Dragos and his followers. Her innocence taken, Corinne has lost a piece of her heart as well--the one thing that gave her hope during her imprisonment, and the only thing that matters to her now that she is free.
Assigned to safeguard Corinne on her trip home is a formidable golden-eyed Breed male called Hunter. Once Dragos's most deadly assassin, Hunter now works for the Order, and he's hell-bent on making Dragos pay for his manifold sins. Bonded to Corinne by their mutual desire, Hunter will have to decide how far he'll go to end Dragos's reign of evil--even if carrying out his mission means shattering Corinne's tender heart.