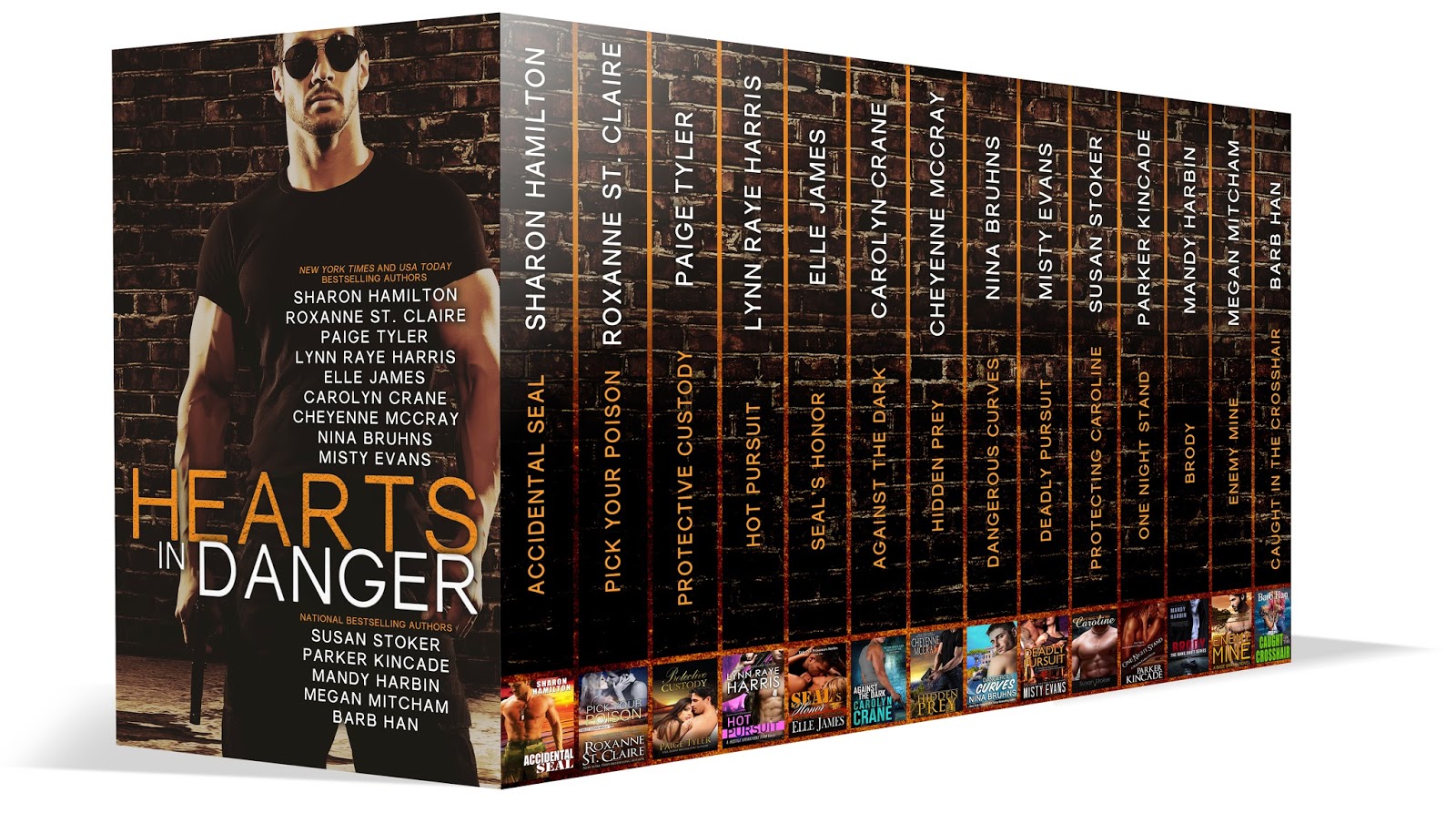 FOURTEEN stories of thrilling romance to benefit the American Heart Association. These full length, Romantic Suspense stories come from NEW YORK TIMES, USA TODAY, AND NATIONAL BESTSELLING AUTHORS and is only $0.99 for a limited time!

Accidental SEAL by Sharon Hamilton: Navy SEAL Kyle Lansdowne goes looking for his missing SEAL Team 3 buddy Armando who has been kidnapped by a drug gang intent on buying specialized military equipment. Newbie Realtor Christy Nelson holds her first Open House but is given the wrong address, and finds a hot naked SEAL in the master bedroom. Their little misunderstanding leads to a hot affair until the gang uses Christy as bait to lure Kyle into a trap to ransom his honor.

Pick Your Poison by Roxanne St. Claire: Meet Benjamin Youngblood - he’s sexy, smart, spectacular and ... about to lose his job for the best security firm in the world. He’s got one chance to prove himself and nothing will stop him. Not even a flower farmer. When Ben sets out to track and trap an assassin, he's forced to trust a feisty farmer who could be as dangerous as her homegrown poison. Ben and Callie join forces to zero in on the killer, taking a few heated detours along the way. Can they stay alive long enough to save Ben’s job, stop an assassin, and find true love?

Protective Custody by Paige Tyler: Someone is stalking reporter Paisley McCoy, and police detective Gray Beckham is the only man who can protect her. Having a dad on the force has led to one hard and fast rule – she doesn’t date cops. And while she might be sexy as hell, there’s no way he’s going anywhere near the captain’s daughter. Paisley and Gray can’t deny the chemistry between them, though. But as that connection turns into romance, they find out the stalker is a far greater threat than they had originally thought. And that if he can’t have her, no one will.

Hot Pursuit by Lynn Raye Harris: When someone starts shooting at Evie Baker, there's only one man dangerous enough to help her--the man who broke her heart ten years ago. Hostile Operations Team soldier Matt Girard uses all his considerable black ops skill to protect Evie from someone who thinks she possesses information that could bring down a crime syndicate. But working together shows Matt what he gave up--can he claim Evie for his own after what he did in the past?

SEAL's Honor by Elle James: Two Navy SEALs jeopardize their lives and hearts in a battle-torn land when they vie for the love of one sexy Night Stalker helicopter pilot.

Against The Dark by Carolyn Crane: Angel is an ex-safecracker forced into one last heist. Cole is an undercover agent with big plans for his gorgeous thief—he'll make her pose as his girlfriend to help with a dangerous mission.

Hidden Prey by Cheyenne McCray: Tori flees an abusive relationship and heads to her hometown in Arizona. When she arrives, she’s in the wrong place at the wrong time and witnesses the execution of a Federal agent by the son of the head of the Jimenez Cartel. Special Agent Landon Walker rescues Tori and sets out to protect her, but soon protecting her isn’t enough. He’ll go to the ends of the earth for her—and never let her go.

Dangerous Curves by Nina Bruhns: A spec ops transporter for STORM Corps takes on drones, bad guys, and car chases on the coast of Italy—and falls for a beautiful scientist whose curves are far more dangerous than the road!

Deadly Pursuit by Misty Evans: One year ago, rookie FBI agent Celina Davenport pulled off the ultimate undercover operation…she seduced Emilio Londano – the dangerous leader of the San Diego Mafia – and destroyed his illegal empire. When Londano escapes a maximum security prison and begins picking off Celina’s friends and coworkers, everyone she knows becomes a target. Including DEA agent Cooper Harris, the man who once broke her heart and is now assigned to be her bodyguard. Cooper must risk his career – and his heart – to keep Celina alive. But will their past, with its forbidden passions and impulsive choices, put them directly in the killer’s crosshairs?

Protecting Caroline by Susan Stoker: Caroline helps foil a terrorist plot when she finds herself on a plane that’s hijacked (with the help of three members of a SEAL team), but after she gets home she finds herself still in the sights of the terrorists. She can only hope Wolf and his team will be able to save her in time.

One Night Stand by Parker Kincade: Amanda Martin decides to have a one-night stand. No relationship, no promises … just hot, indulgent sex. What she doesn’t anticipate is meeting a handsome-as-sin stranger who gives her pleasure unlike she’s ever known. A stranger with a deadly secret…

Brody by Mandy Harbin: Brody thinks the skittish Xan is sexy as hell, but it’s not her hot body that has him rocked to his core. He knows her from somewhere, and in his line of work, that’s a dangerous thing. Following orders have never been this hard, but when he finds out she’s his next assignment, he will protect her at all costs … even if what she needs protection from most is him.

Enemy Mine by Megan Mitcham: Born in the blood of Sierra Leone's Civil War, enslaved, then sold to the US as an orphan, Base Branch operative Sloan Harris is emotionally dead and driven by vengeance. With no soul to give, her body becomes the bargaining chip to infiltrate a warlord's inner circle. As son of the warlord, Baine Kendrick will happily use Sloan's body if it expedites his father's demise. Yet, he is wholly unprepared for the possessive and protective emotions she provokes. In the Devil's den with Baine by her side, Sloan braves certain death and discovers a spirit for living.

Caught in the Crosshair by Barb Han: On a tropical island with a hurricane brewing and dangerous men closing in, private security firm owner Jaden Dean will need to work side-by-side with Lauren James to survive and find her brother. The cartel he's associated with seems to be one step ahead and Jaden’s operatives are being killed one-by-one. He will have to use all his specialized training and risk everything, including his heart, to outwit the deadly group and keep Lauren safe. Their magnetic attraction isn't helping matters...because even a slight distraction might just get them both killed.

Posted by Kimberly Rocha at 1:06 PM