GUEST POST by STACEY AGDERN ** The Duke by Kerrigan Byrne ** 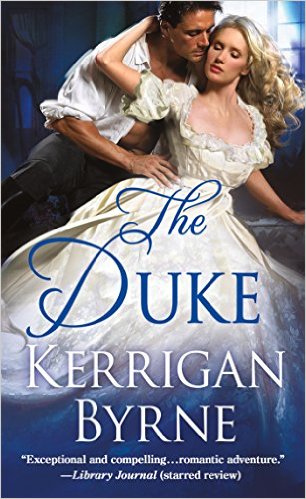 
Each of Kerrigan Byrne’s books has dealt with redemption and heroes whose pasts are not as clear as most heroes we see in historical romance.  But more than any of the others, The Duke isn’t about finding your one true love, but about what needs to happen for someone to be ready to fall in love.
‘Tell me exactly,’ the heroine says to the hero in the middle of the black moment, ‘when I should have revealed my tender secret to you?’
When indeed.  Especially considering the hero, the book’s titular Duke, and the heroine have spent the entire length of the book dealing with issues of timing.
Our hero first meets the heroine at her ‘night job’, as a hostess at a ‘club’; she is the ‘whore’ with the heart of gold who blows his mind and his heart.  She meets him again at her ‘day job’, when on the verge of death from injuries he receives on the battlefield, she literally nurses him back to health. Finally, she is his next door neighbor, the widow of an older man.  He holds the first as a perfect moment in his mind, doesn’t know the second and cannot stand the woman he meets in the third.  To him, these three women  are unconnected, even though they are the same person.
“How could I not have known?” the hero laments, “How could I not have recognized you by how badly I wanted you?”
How could he not have indeed. Paranormal authors (including Bec McMaster in Lady Quicksilver) have often dealt with the question of identity and timing; shifters (and some vampires that emulate them) know their mate by scent.
Unfortunately, a purely human duke doesn’t have that capacity. It takes information and an unexpected glimpse of a painting for our hero to realize that the woman who haunts his dreams and the woman who he’s beginning to fall for in the present are one and the same.

Only one woman had seen him as he was depicted in that damnable painting…The memory he’d lost slammed back into him with bone shattering speed.  It climbed into his psyche.  It created him, destroyed him, and then built something new from the broken pieces as he stared at the rendering of the past.

The question then becomes, would the Duke as he was at the beginning of the book, or even at the middle, be the sort of man who could have handled being in love with the heroine.  The man he is at the end answers the question himself, and quite well.

She was the mistress of her own destiny.  A destiny that might not include him, because he’d never presented himself to her as an enticement.  Only an opponent…He’d pompously thought (she’d) take him in whatever capacity he offered.  That she’d be happy to accept this broken, bitter, barbarous man he’d allowed himself to b become.  It had never occurred to him she’d want more.  Or that he had no right to her secrets. That he had no claim on her heart.

This is a romance, of course, so I’ll leave you to figure out how our hero manages to present himself to the heroine as an enticement after all.  Because in the end, the timing, and the Duke, are right after all.

Originally posted at HEROES AND HEARTBREAKERS
Posted by Kimberly Rocha at 2:23 PM