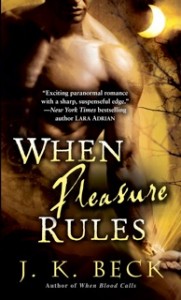 When Pleasure Rules Book 2 (Rand and Lissa's story) Released:September 28, 2010. I really enjoyed Rand's story. Rand is a Werewolf and has came home to see if he can find out who is doing all the murders at home, But in the mean time he crosses paths with Lissa and can't stop thinking of her. So what is to come of the murders and Lissa. Rand's story will have you hooked from page one and keep you there till the end. The Shadow Keepers is a great series and will keep you thirsting for more. If you haven't read this series you are really missing out. If you have thumbs up to you and let us know what you think of it.
~Joey~

Here is the write up on it from J K Beck's Page:

Though Rand saw compassion in his Alpha’s eyes, what he saw most was determination. This wasn’t a request; it was an order.
“I have another job for you, Rand. I need you to return home to Los Angeles.”
Desire is the deadliest enemy of them all.
“Dark, sexy & intense…the Shadow Keepers are rife with moral dilemmas, steamy sex, and an ageless political feud. Something for everyone!” – RT Book Reviews
From the back cover
Seven innocents have been brutally murdered on the streets of Los Angeles, yet the Shadow Alliance has no suspects and no leads. And as more bodies are discovered, the age-old feud between the vampires and werewolves threatens to explode and turn the city into a living nightmare.
With her back to the wall, Lissa Monroe—a strong-willed, ravishingly beautiful succubus who entices men to surrender their souls—agrees to go undercover for the Alliance. Her mission: infiltrate the mind of werewolf leader Vincent Rand, a ferociously alluring enemy who has a powerful hold over her. Lissa has never lost control of her deepest desires, but Rand is an impenetrable paradox, a principled soldier who fears nothing—except perhaps the darkness of his own past. As the city of Angels teeters on the brink of apocalypse, these two adversaries must join together to have even the slimmest chance of surviving a more lethal enemy hidden in plain sight.
“Right from the get-go, Lissa and Rand’s story grabs you and won’t let go… When Pleasure Rules is a super fun, action-packed, and let’s not forget sizzling story…” Night Owl Reviews