An Irresistible Bachelor By Jessica Bird AKA J. R. Ward 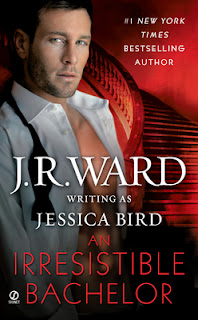 An Irresistible Bachelor By Jessica Bird AKA J. R. Ward. This was a really good read. I really enjoyed this book and hope that one day we get more books since there is so many different ways she can go with this one. Would also be nice to see what happens later on with Jack and Callie. J.R. Ward is one of my favorite auther from her Black Dagger Brotherhood series. I am glad i came across this pre-order last month. It came out July 5th. If you like the playboy types then Jack is your man. Give this book a try i promise you will love it. ~Joey~

Jack Walker has given up his playboy status and, much to his Machiavellian mother's delight, become engaged to a wealthy socialite. Now mommy dearest can go ahead with her plans to make him governor of Massachusetts. But the best-laid plans often go offtrack, and in this case the cause of the derailment is art conservationist Callie Burke. The minute Jack lays eyes on her, he forgets everything, including his politically acceptable fiancee. He hires Callie to restore a recently acquired John Singleton Copley portrait of one of his ancestors and moves her into his mansion so she can work uninterrupted on the $5 million art treasure, but both Callie and the painting conceal secrets.