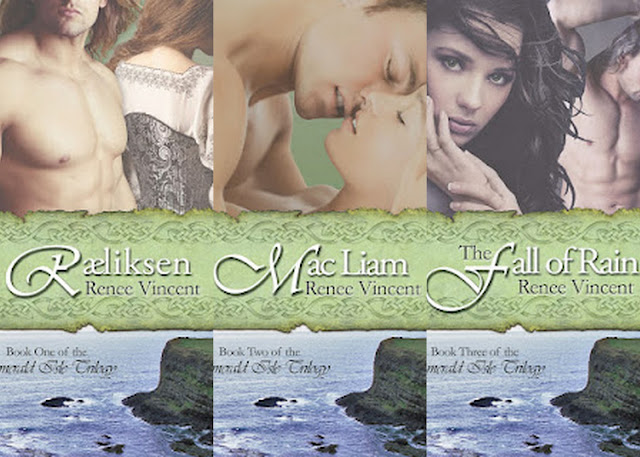 I wanted to take a break and read for FUN... Every once in a while I like to go off the beaten path from all the reads I have promised to read and just grab something. I know Renee Vincent is not a new author, but she is new to me. After a little Twitter back and forth, I went to her website and checked out the blurbs for her historical series and decided I would give one a try. Only thing is, after reading the first one, Raeliksen and being left a crying mess, I had to jump right into Mac Liam for my own sanity, once I was left in a much better state of mind, I grabbed The Fall of Rain and once again was gasping for air. I loved this Trilogy and I wanted to share it with you.

What is it that kept me coming back? Hmmm well let's see... Hot Vikings, ancient Ireland, beautiful princess and battles are a few of the reasons. Maybe the awesome story... in addition to the fact that I have never read something quite like it.

In Raeliksen, we find  Daegan Raeliksen, a wealthy merchant and a chieftain in his own right,  in search of a wife. Daegan. In his travels, Daeaen has come upon the beautiful Mara, a Irish woman wandering the countryside on her own. Days go by and Daegan watches Mara as she spends her time near the shore. He is captivated by not only her beauty, but her essence as well. Daegan doesn't realize, but Mara is the daughter of a Irish King, regardless of that fact, the merchant/ chieftain has decided in a his infinite wisdom, that Mara is to be his wife.

When Mara's life becomes endangered, Daegan must act quickly to save her, in the process, whisk her away, or basically kidnap her. Raeliksen is an epic tale of the determination this larger than life man has when it comes to what he wants and the woman that at first seems the shy bit of a thing, but upon closer observation is quite the strong character. Be prepared for tears in this tale as well as deep, dark secrets that come to light.

Should you continue to read on here, you will find spoilers to the first book, which cannot be helped.

The continuation of the Emerald Isle trilogy comes to us in Mac Liam, seven years after the Daegan Raeliksen saga, we find Breandan Mac Liam, who was introduced in the first book, still pining after his lost love. He honestly feels no remorse in his pining and only wishes for an opportunity to see the object of his affection again. That opportunity arises when he receives news that the King of Connacht, Mara's father is on his deathbed and wishes to see his only daughter before he passes on. The King has asked that Breandan escort his daughter from Inis Mor to him.

Mara lives in the Isle of Inis Mor with the product of her short but timeless love affair with Daegan, their son Lochlann. Six years after the birth of Lochlann she has neither seen nor heard from her father, Callan, the King of Connacht. She lives under the watchful of of her deceased husband's best friend Tait, the new Chieftain, and Nevan, King on Inis Mor. Lately, Mara, although seemingly content in her existence has been feeling low. She watches as those around her have full lives with intact families and she feels a pang of something if not jealousy. The love she has for her son and the extreme love she still feels for Daegan keep her going but also leave her wanting.

Mac Liam is a story of secrets coming to light and dreams coming true. It is a tale of second chances and enlightenment, acceptance and need. Breandan is a gentleman and a catch and Mara basically has no chance when they are reunited, and after the outcome in Raeliksen, you don't want to see Mara get away either.

Finally we come full circle with The Fall of Rain. Present day, where we find Kentucky native Lorraine O'Connor coming out of a long relationship with a total jerk who didn't deserve her. All her life, Lorraine has had some pretty vivid dreams of ancient Ireland and a handsome Viking. She has an affinity for Ireland and her dream is to travel there. With her breakup, her best friend Patrick books her on the first flight to the Emerald Isle to live it up and fulfill her lifelong dreams. Reluctantly, Lorraine, or Rain as her friends call her, makes her journey to Ireland and ends up staying on Inis Mor.

Leif Daegansen is an archaeologist from Norway who, living on Inis Mor, is trying to find the definitive Viking/Ireland link. So involved in his task, he rarely takes the time to see what's surrounds him. With his recent find or an intricately designed treasure box, he is more determined to find that link, until a beautiful female faints dead away in his presence while out on his ride on horseback. When hours later, Lorraine awakens in Leif's home, confusion and enlightenment abound in a heartbeat as Lorraine comes face to face with the man in her dreams. Suddenly coming to terms that reincarnation does in fact happen, spurns Lorraine into action. Being reunited with her lost love, centuries after his untimely demise has Rain determined not to allow him to slip though her fingers. Leif, a tad clueless at first feels a connection with Rain, but doesn't know from where it comes and really doesn't question it.

Can Rain make Leif see that he is in actuality her lost love? What will he do when she confronts him with the story and some unbelievable facts? Of course you will have to read The Fall of Rain to find out, because if you came this far in the Emerald Isle Trilogy, there is no place to go but forward!