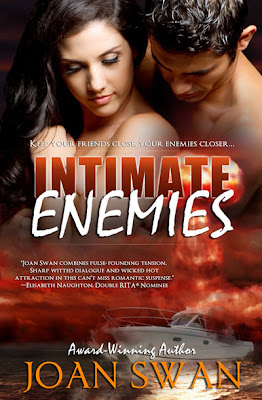 Cassie Christo heads to her home on the Pacific Coast in Baja, Mexico with a task in mind, to get rid of the step-father that's been living off Cassie's deceased mother's wealth. An emergency room physician, Cassie has been in mourning for her mother and step-brother who perished in an apparent boat fire. Sent on a sabbatical by the hospital she just finished her residency with to work on her feelings and move on from the deaths. Cassie has another, more pleasant task in mind, find the unknown man that stood by her side and was her shoulder to cry on at her funerals of her beloved family members.She is also back in Baja to finish construction on her medical clinic that she is so eager to open.

Nothing however is cut and dry when Cassie enters Baja, especially when she arrives at the home that once held so many good memories for her to find her step-father thinking he is the proprietor of all and to her shock, the man who stood by her in the cemetery, working for Saul, the notorious step-father. Saul is by no means happy to see his step-daughter and now must devise a way to rid himself of her presence. Saul of course, is one shady character, living high off his dead wife's prosperity as well as some illegal ventures he has began. Not only does she have to deal with Saul, but the gang situation in her town is also a big issue.

Rio Santana once was Cassie's rock. He was something she had to look forward to after the ghosts of her past could be put to rest, but seeing Rio with Saul, and finding that he is Saul's head of security, Cassie doesn't know how to act or what to think. From the first there is a mutual attraction that goes way beyond sexual, but Cassie has had things happen to her in the last year that have made her re-think her entire set of values and her feelings. Rio has had it bad for his boss's step-daughter from the minute she put her head on his shoulder in the cemetery, but there's way more to Rio than meets the eye. Getting involved with the beautiful doctor could be very hazardous to both of their health's. A lot more is going on than some gang violence and to Rio's astonishment, Cassie ends up smack in the middle of it when she starts asking questions about the boat accident that claimed her mother's life and the life of her step-brother.

Apparently everyone wants Cassie to head back to San Diego, but they more they push, the more she is determined to stay and figure out why while attempting to find dirt on Saul to get him out of her home or behind bars, creating enemies all around her. Rio wonders if protecting this somewhat thick-headed female is  an uphill battle he wants to endeavor.  When the lines are drawn and Cassie has placed herself and others in danger a series of events happen to change the entire atmosphere around her. Will it be for good or bad? Reading Intimate Enemies by Joan Swan is the key to finding out.

Intimate Enemies is Joan Swan's second book and it is fabulous. Joan has the knack for getting right down to the core of it. This story has non-stop action, intrigue and heat. The characters of Rio and Cassie sizzle from the get go, and they also go through a roller-coaster of emotion. Rio,  normally very level-headed is brought to the brink of madness with Cassie's hot to cold moods and it is part of the heat. I like the way Joan did not over dramatize the gangs and went to the heart of the dilemma with Saul being a center. I enjoyed the way I wasn't sure who was a good guy and who wasn't and finding out in the end was so part of the charm of this read.

Joan Swan has yet another winner with Intimate Enemies. I highly recommend it. It doesn't disappoint!