GUEST REVIEW OF DESIREE HOLT'S ~EYES OF THE WOLF~ 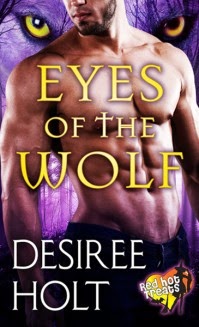 Jamie Dalton loves to read. That makes her job as a librarian perfect for her. From the age of nine, she wrote stories about ghosts, goblins and all sorts of creatures. As she grew older, she continued to write these stories but they became a little more erotic. Feeling they were not very good, she never tried to publish them. Jamie was also single and lives alone with her black cat ,Mischief in her deceased grandparent's house. She was never very good with the opposite sex and had a few short relationships, they never worked out. Her favorite holiday was Halloween. She loved it more than Christmas. Coming home from candy shopping, she meets her sexy, hot next door neighbor Miko Volka, Mike as he likes to be called. Jamie is instantly attracted to him and very turned on too.

Mike Volka is over six feet tall with a lean body of a runner. He is an architect, and he has a secret. Mike Volka is a shapeshifter. He can turn into a wolf any time he wants to, not just during a full moon. Mike's parents were killed by marauders from a renegade pack. He escaped before they came after him. As a result, he was without a pack. During a conversation with his father before he was killed, Mike was told the story about a book that would be able to answer any questions about his family, his pack that he might need answered. His search for this book leads him to Jamie.

Unknown to Jamie, she has found the book that Mike was looking for. She finds out a great deal of information about werewolves, including that they mate for life and can mate with humans. They both have strong feelings for each other. Mike realizes that Jamie is his mate and decides to take the chance to reveal his true nature to Jamie. Jamie does not freak out. They reveal their true feelings for each other and Mike now has the book to begin his search for his pack.

I enjoyed this novella by Desiree Holt. She is a great storyteller. At first Mike was only after the book, but after he meets Jamie he is lost. The sex is steamy and makes you want to get a shapeshifter of your own. This was another great story by Desiree Holt and I highly recommend it.

~JANET RODMAN~
Posted by Kimberly Rocha at 12:00 AM