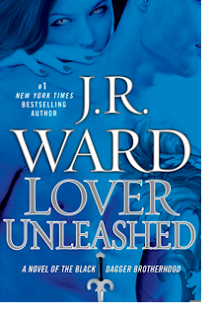 Payne, twin sister of Vishous, is cut from the same dark, warrior cloth as her brother:  A fighter by nature, and a maverick when it comes to the traditional role of Chosen females, there is no place for her on the Far Side… and no role for her on the front lines of the war, either.
When she suffers a paralyzing injury, human surgeon Dr. Manuel Manello is called in to treat her as only he can- and he soon gets sucked into her dangerous, secret world.  Although he never before believed in things that go bump in the night- like vampires- he finds himself more than willing to be seduced by the powerful female who marks both his body and his soul.
As the two find so much more than an erotic connection, the human and vampire worlds collide … just as a centuries old score catches up with Payne and puts both her love and her life in deadly jeopardy.

OMG J.R. Ward is Flipping brilliant is all i need to say. She had you hooked from page one of this book. Payne and Manny's story was great and what i loved even more was getting to see the other side of Vishous that you didn't see in his book. This book will have you all over a up and down roller coaster. So hang on tight, it's going to be a bumpy ride. LOL. If you haven't read the BDB series then you need to get to it because this is a series you dont want to miss. Each book is packed with suspense and hotness that will keep you begging for more in each book.
~Joey~


Go here to see a list of BDB book: http://www.jrward.com/bdb/index-books.html

5 Stars (Hook Line and Sinker)
Posted by Kimberly Rocha at 1:42 PM No comments: 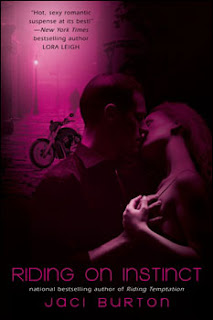 Department of Justice agent Shadoe Grayson is out to prove she's no rookie, and eagerly accepts her first undercover assignment at a strip club in New Orleans. Working with the Wild Riders, a government agency of bad boy bikers, her goal is to bring down a corrupt DEA agent. All she has to do now is learn to strip like a pro.

Standing in her way is the arrogant and smokin' hot Spencer King, her partner and one of the Wild Riders. Spence thinks she looks more like a schoolteacher than a stripper, and doubts her ability to do the job. But when he mockingly challenges Shadoe to strip just for him, he finds out there's more to the surprisingly sexy agent than by-the-book rules and Government Issue pantsuits.
Now Spencer has to resist his baser instincts while Shadoe learns that taking off your clothes doesn't always equal losing control...

5 Stars (Hook Line and Sinker)
Posted by Kimberly Rocha at 1:14 PM No comments: 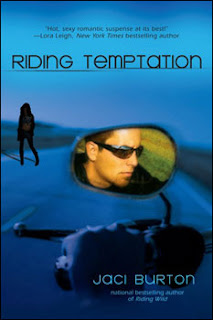 He's a biker working undercover for the Feds. She joined the Wild Riders for reasons of her own. Together, they're burning up the asphalt and tearing headlong into danger and passion...Naked under leather.

Ever since runaway Jessie Matthews teamed up with the gang of special ops bikers, the Wild Riders have thought of her as their kid sister. Except for Diaz Delgado. Over the past few years he's been watching the budding of a ripe young woman. Jessie's glad somebody finally sees her for who she is—and she's thrilled it's Diaz. His dark good looks and killer body have tempted her since day one.

Diaz's unbrotherly urges have been hard to fight but the last thing he'd want to do is hurt Jessie and break up the gang. But when they both go undercover to infiltrate a group of killer survivalists, he knows it'll be hard to keep his distance—especially when the mission takes a risky turn. Now Diaz has no choice but to open himself up to the one woman who may be strong enough to take him on.

4 Stars (Brilliant)
Posted by Kimberly Rocha at 11:56 AM No comments: 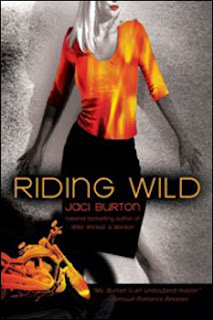 
He's a Harley-riding ex-thief working undercover for the government. She's a gun-toting ex-socialite hired to protect a valuable museum exhibit. But in her attempt to stop a heist, she never anticipated having her breath and her heart stolen...
Mac Canfield was the last man Lily West expected to see again, never mind aim her gun at. But here he was, the bad boy who'd broken her heart years ago-still a thief, this time high-jacking a priceless artifact—and it was all she could do to push aside the memories of how it felt to have his perfectly chiseled body next to hers.
Mac was no less shocked to see the beautiful girl-next-door all grown up, threatening to shoot him on the spot. Little did she know she was blowing his cover-and now he had to figure out how to get her out of harm's way without succumbing to his crazy desire to take her on a hot trip down memory lane.
Unfortunately, Lily has no intention of going anywhere with Mac. Which means he has to resort to kidnapping. Unless, of course, she agrees to let him take her for the kind of ride destined to drive them both unbelievably wild.

5 Stars (Hook Line and Sinker)
Posted by Kimberly Rocha at 5:32 PM No comments: 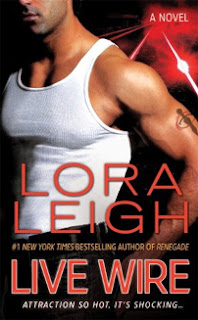 Nobody was happier than I when this book released on Tuesday. I was actually hoping I could download it to my Kindle at midnight on the East Coast not realizing that it wasn't released until 3am because of West Coast time. At least I had Livewire to wake up to. Jordan Malone has been one of my favorite Seals and Elite Ops characters from day one. Yes...he is cocky and brooding, but the man just drips testosterone.

From day one with Tehya Talamosi's introduction into the series, we knew that she and Jordan should end up together. Her comic relief and flirting to his hard-ass attitude are the perfect off-set to one another. The Prologue, Enigma, which was released in December, was a gut-wrenching read for me, as I'm sure it was for many of Elite Ops fans. We saw Tehya and Jordan finally liberating themselves of some long-building sexual frustration before an inevitable but saddening break.

Nine months after Enigma, we find Tehya, now living as Teylor Johnson, has begun to build herself and new life. She has moved to Maryland and purchased a home and a business, trying to keep a low profile. She is also trying to come to terms with the love of her life, Jordan Malone, not caring enough to be with her, or so it seems. Jordan has a belief that  " Love is an illusion" and let's everyone around him know it. Arriving one evening at home she is blind-sided by Jordan getting past all her security measures and appearing in her home. At first she believes that Jordan is there for her, but then she quickly comes to her conclusion that he is there because there is trouble.

Evidently Tehya is in danger by some associates of her dead father's criminal entities and Jordan is there to protect her. He wants Tehya to disappear again after 25 years on the run, but she refuses. Tehya is tired of running from life, even if it means an end to her own life.