THE TROUBLE WITH COWBOYS (Catcher Creek #1) by MELISSA CUTLER 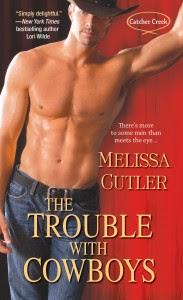 Amy Sorentino is a legend of sorts. A former contestant on a big reality cooking show, The Ultimate Chef Showdown. She is infamous for a very public outburst during the filming. The ultra talented chef loses the big prize and eventually returns to her life in Catcher Creek as one of three Sorentino sisters struggling to keep the family ranch afloat after their father's untimely death and their mother's emotional breakdown which, which puts her in a home with constant care. The Sorentino sisters have decided to turn the family ranch into a dude ranch that features meals comprised of staples from all local growers and suppliers.

Kellan Reed, cowboy extraordinaire, owns a prestigious cattle ranch that produces the best beef around. Kellan has proudly worked to the bone to start and run his business. Kellan also has a big secret he would prefer the world never know. He is the sole heir to Amarex oil corporation, of which his maternal uncle  is the shady owner. Uncle Morton attempts continuously to drag his nephew into his unethical dealings, but thus far, Kellan has been able to steer clear.

Amy and Kellan bump into on another at the local Quick Stand, where chef Amy is in search of celery and she holds up the line at the store. Some of the locals in that line bring up the touchy subject of The Ultimate Chef showdown and also try to rile her about her family and just before Amy goes off on the locals, Kellan Reed steps in to save the day. Immediately sparks fly between Kellan and Amy and there is no use denying the fire that has ignited between them, even though Amy has a set of rules with number 1 being "NO COWBOYS".

When Kellan finds out that his uncle is after Amy's childhood home, he realizes this is a conflict of interest and  he attempts to step back, only to be sucked back in due to, first, his feelings, and second, Sorentino family issues that tug at his heart as well. Sisters, Amy, Rachel and Jenna are at wits end with family issues and throwing in the prospect of losing the ranch may just too much to handle for everyone involved.

The Trouble With Cowboys by Melissa Cutler is a book that grabs you from the first, with its immediate sparks flying between the Amy and Kellan. Then it keeps you interested with each character's story. Kellan is a straight forward decent guy. I immediately was attracted to his passion for his work and being a self-made man. Amy, having been taken advantage of in her past is a tad gun shy, especially when it comes to cowboy Kellan, but his persistence is admirable. Melissa Cutler has added a cast of characters who only compliment the entire scheme of things with Kellan's friends Vaughn, Lisa and Chris and Amy's quirky new employees, Sloan and Douglas.

I loved the The Trouble With Cowboys by Melissa Cutler. This story is riveting and well written with a great balance of humor and drama. This book goes through a gamut of emotions, laughter and tears and leaves the reader well sated. I am so looking forward to the next in the Catcher Creek series as I am already making bets on who will be the next two to fall in love. Gahhhhh, must we wait a year for this book?