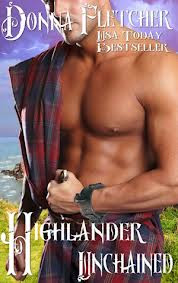 The Highlands of Scotland 1200

Dawn lives in a village where she merely exists. Having been born without a voice, and arriving in the village around the age of nine with her mother, she never has fully been accepted by all. Of course some would call her infirmity evil, and that she is touched by the devil, or that she is simple, but that is far from the truth. Dawn can in fact get her point across very well when she needs to, many times using her best friend Lila as her translator.

As soon as she sees him, Dawn cannot keep him out of her thoughts. Cree, the Devil as he is called by the multitude, arrives in her village in shackles, defeated by Colum, who is basically the overseer. His liege lord is Roland Gerwan, the Earl of Carrick and Colum does his bidding. Believing that he has the upper hand, Colum imprisons Cree in a hut under guard, then comes up with the brilliant idea to find out all Cree's secrets by sending the mute, Dawn to care for him. Not only is she to care for him, but she is do do anything Cree wants, including being bed by this highlander if he so wishes.

At first, Dawn finds Cree frightening, but she soon realizes that the warrior is kind and fair and she is torn between reporting all back to the hated Colum, or protecting Cree. When Cree escapes the hut and his warriors join him to take over Dawn's village, he immediately seeks her out to protect her if not something more. Will Cree overcome and be the great leader he is destined to be? Will Dawn have a bright future surrounded by those she cares for? Read Highlander Unchained to find out!

It's hard to not give too much away with this great story. There are so many ups and downs. So many secrets and so much mystery. Nothing is as it seems to be and that just adds so much to Highlander Unchained. Dawn's inability to speak only makes you adore her more and the fact that Cree understands her and actually considers her communication speech makes the reader love him. Such a great story! Definitely one that I highly recommend. My only suggestion to the reader is that you also have Forbidden Highlander at hand, because Highlander Unchained has a cliffhanger, and I had to IMMEDIATELY begin Forbidden Highlander for my own sanity.

5 Stars (Hook Line and Sinker)
Posted by Kimberly Rocha at 8:02 AM