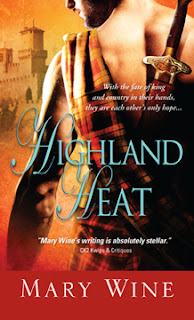 This is the third book in Mary Wine's Highlander series and I hope there will be more. The character, Deirdre Chattan first appeared in To Conquer a Highlander.Deirdre, the eldest of the Chattan sisters, is now in a convent after disgracing herself and her family by taking Melor Douglas as a lover while she was betrothed to Laird Connor Lindsey. Melor was using her to exact revenge on Lindsey for lands that he believed belonged to Douglas. Deirdre, resigned to spending her youth in the convent alongside her sister Kaie who has a true calling, toils away with the knowledge she really doesn't belong in the convent

Along comes Laird Quinton Cameron who has lusted after Deirdre for some time. He believes that Joan Beaufort, Queen of Scotland has taken sanctuary in the convent where the Chattan sister's reside. He insists on searching against the wishes of the nuns but Deirdre attempts to stand in his way. Deirdre and Quinton have a heated exchange which only proves the pair would be a volatile combination. Not finding the Queen hidden at the convent, Quinton and his clan members leave.

That evening, while Deirdre labors away on the convent floors, a knock sounds at the door. It is the Queen after-all and she is asking sanctuary. When she sees a resemblance between  Deirdre and herself, she asks Deirdre to trade identities with her so she may freely travel to meet her betrothed. Queen Joan offers Deirdre a place in her household once she is safely married. Deirdre, seeing it as her chance at freedom, agrees, but with that agreement comes a journey and life-changing events. These events lead her to Quinton Cameron, but is it truly her place?

I really enjoyed this book. I read To Conquer a Highlander and Highland Hellcat and was eager to finally read Highland Heat.  When we first meet Deirdre, I wasn't a fan of hers in the least, but she redeems herself completely.


Here is an except from Mary Wine's Highland Heat, which can also be found on her website