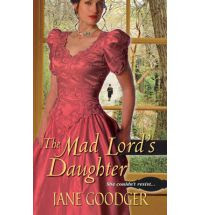 Melissa Atwell has spent eighteen years of her life closed away from society and its perils. Her father believed she would perish from a disease as her mother did if she had contact with the outside world.
Not only is she basically locked away, but contact with her is through gloves. While she is a prisoner in her own home, she is highly educated but naive.

When her father passes away, she is sent to live with her uncle, the Earl of Braddock, who attempts to prepare Melissa for a season in London and hopefully a quick marriage. Once Melissa is installed in her temporary home with her family, feelings she never knew possible begin to awaken. A forbidden attraction comes to light that threatens to bring dark secrets to the forefront of proper London society. Will Melissa be able to survive her season in London? Will her secrets bring her down low or will she be freed from her isolation? All is revealed in The Mad Lord's Daughter by Jane Goodger.

This was my first read by Jane Goodger and I must say that I enjoyed it thoroughly. If I went more in depth with this review I would be giving away too much of the story, and I do not want to ruin it for anyone. Watching Melissa open like a delicate flower is so charming. The way her new family take to her is delightful and finding out all the dark secrets in The Mad Lord's Daughter, make this a must read. Once the hero of the story is revealed and we get to know this honorable man, we see him struggle with a promise he makes, or his feelings. The story is beautifully written and I will be reading more of Jane Goodger.