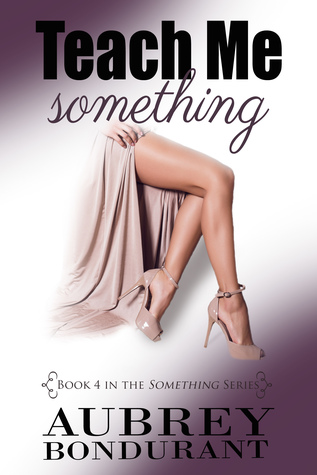 I’ve followed the “Something” series from the beginning and I have to say, Teach Me Something may be my favorite. As with her previous books, Aubrey Bondurant writes a story filled with funny, steamy, and tender moments that will keep you turning pages well into the wee hours of the morning.

Catherine Davenport had a successful career as editor of Cosmo Life fashion magazine. Unfortunately her marriage had not been so successful. While she’d been about to further commit to her husband by starting a family, he’d been planning their divorce. He’d shredded her self-confidence, telling her she was boring, dull, and predictable. He’d moved on to someone younger while she’d been in a rut for 2 years. She had a hard time meeting dating prospects and couldn’t put herself out there online because of her job. So Catherine turns to an instructor at a private club to climb out of her rut and breathe new life into her self-esteem. Donning a wig and using a fictitious name and profile, Catherine meets her instructor, Calvin, the man she hopes will improve her dating strategy and sexual confidence. Calvin seemed understanding of her situation and suggested texting to work on her flirting skills. Also, her homework was to comprise a list of 50 things she wanted to do. Half of those to be sexual. Though his read on her took her off guard, Catherine liked the anonymity and the chance to reinvent herself. A constant list maker, she had no trouble compiling her criteria for the perfect match and her fantasy list. And as for texting, she enlisted the help of her girlfriends, even learning the fun of emoticons. It wasn’t long before she found herself anticipating her next meeting with Calvin and anxious for his texts. Catherine knew Calvin was only being accommodating on a professional level but she enjoyed his attention.
On a weekend Vegas retreat with friends, Catherine begins surreptitiously texting Calvin when she realizes her friend Will’s phone is chirping in sync with her texts. Could it be? Will was Calvin? They were in the same professional circle. He was someone she’d worked with, part of her inner circle of friends. And he was considerably younger. Catherine was mortified but couldn’t blame Will. He hadn’t caused the situation. Will and Catherine were able to get past the awkwardness and continued their friendship. In fact, it seemed they grew even closer than before. Will gave her advice on dating and challenged her to step out of her comfort zone. He even got her a Magic 8 ball to help her make decisions since she tended to over analyze everything. With Will’s help, Catherine was actually having fun. She was more relaxed and less analytical about her decisions. But when she put her flirting skills to use on one of Will’s friends, Will didn’t like it. Even if neither was ready to admit it, something had been building between them. Even though Catherine knew it could jeopardize their friendship, when Will kissed her, she didn’t want it to stop. Will knew he didn’t meet her criteria for a dating match. She was out of his league, but he suggested they enjoy one another for the short term and still be friends beyond that. Catherine worried if she could have a fling without the emotional investment, but she’d been through so much, didn’t she deserve to enjoy this? With Will, every touch was electric. When they were together, it was raw and physical. He’d even memorized her fantasy list down to the number. He may have been younger, but “obviously age did not equal skill”. They had an overwhelming connection. It felt natural to be with him, holding hands, dancing.
As their friendship changed to something more, Catherine realized she was changing too. She was becoming more adventurous. There was a playful side to her that seemed to only come out with Will. She’d never been more secure. “Will had become important to her, not as a crutch but as someone who brought out a side of her she hadn’t thought existed. He’d blown out of the water any criteria she’d thought she needed to be happy.” The more time she spent with Will, the more attached she was feeling to a man she had no future with. Could she continue to keep things in the casual box? Catherine was afraid she was in trouble when it came to wanting more than just the physical with Will.

What a great story about life and love. It was definitely a sexy read, but it had its “tug at the heart” moments too. Catherine and Will taught each other something. Catherine learned to embrace the qualities that made her unique. In so doing, she became more comfortable with herself and with her decisions, and she became stronger. Will learned he didn’t have to carry burdens alone. That it was okay to ask for help. That a partnership meant sharing the good and the bad. In addition to the fantastic plot, I also loved seeing old friends from previous books and making a few new ones as well. I’m anxious to see what “something” comes next.
A Book Obsessed Chicks Review Team Selection