My Fierce Highlander by Vonda Sinclair 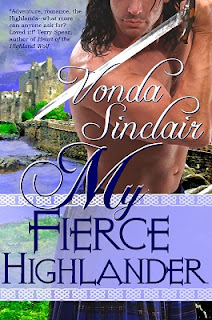 In Vonda Sinclair's My Fierce Highlander, we find Gwyneth Carswell, the English widow of a Scottish brute, searching for survivors of a MacGrath-MacIrwin clan skirmish. She finds one lone man alive and he isn't from her clan. With the help of her reluctant friend and fellow healer, she brings him back to the small cottage she shares with the friend Mora and her own five year old son and tends to his wounds. While doing so, the young widow finds herself inexplicably drawn to the rather handsome Scot.

Laird Alasdair MacGrath finds himself in a precarious position when he awakens the following day from a fever due to his injuries. He has no weapons, no clothing and is on enemy land.If he is found by the MacIrwins, he will surely be killed and his presence also puts Gwyneth, her son and Mora is danger.  When he is introduced to the healer Gwyneth and her son Rory, he is wary of their loyalties and lies about his identity. He also finds rather quickly that he is attracted to the widow, even after he realizes that she was the wife of the man who murdered his father. Alasdair returns as soon as he is able to his lands and people, leaving the young widow behind, but very much still in his thoughts.

Tragedy strikes while Gwyneth and Rory are away from the cottage. Evidently the evil Laird Donald MacIrwin discovers that she helped the enemy and the cottage was burned. Gwyneth takes Rory and escapes on foot to the only possible place for her to go for help, the MacGrath holdings. The MacGrath takes her in, but there are many complications in doing so. Will Gwyneth be able to keep her attraction to the Laird at bay?   Will she be able to find a place for her son  and herself that keeps her safe from the MacIrwin clan? Will the Laird give in to temptation after a few years as a grieving widower? So many questions that can be answered if you only read this book.

My Fierce Highlander is a wonderful first book in Vonda Sinclair's Highlander series. There isn't one moment of boredom, no fillers, just action and intrigue. The wide range of emotions and the excellent story line make room for an adventure.  I highly recommend this read to all. What an awesome first book! Getting right into the second one, My Wild Highlander as soon as I finish this review.

5 Stars (Hook Line and Sinker)
Posted by Kimberly Rocha at 8:10 AM