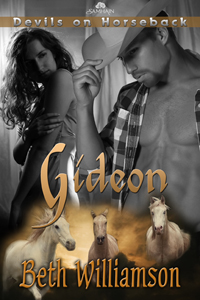 When we meet the handsome former Captain Gideon Blackwood, he's on the run from his home in Tanger, running from interfering females who are trying to marry this most eligible bachelor off. Gideon definitely has other ideas on what he wants out of life at the moment and marriage isn't one of them, even though he's seen all of his "brothers" before him happily married.

Chloe Ruskin is having a very hard time of it.After leaving Virginia with her Grandmother and two small orphaned twin girls, they've broken a wheel on their wagon and can't seem to get help to fix it, until Gideon happens upon the disabled wagon. He's immediately confronted by the prickly Chloe with her shotgun pointed straight at him. Against his better judgement he remains to help the stranded family , in the process becomes entangled with the headstrong female.

Along the way, Chloe's family disappears into thin air, apparently abducted along the trail. Now instead of Gideon going on his merry way, he feels it's his duty to help Chloe get her family back. No matter what, Chloe must find her Grandmother and the girls. They're all she has and her determination has Gideon admiring her one minute and wanting to strangle her the next. What do a former soldier running from commitment and mouthy woman who feels unworthy of love do once they're thrown together? Well they create a very exciting story for one thing.

What an auspicious end to an awesome series. Beth Williamson knows how to grab the reader from the first minute and not let go. I love that Beth has taken people from two totally different life circumstances and brought them together. Chloe is headstrong to her detriment and Gideon is her only saving grace.I highly recommend Devils on Horseback~ Gideon by Beth Williamson. It's a wonderful ride from start to finish.

Posted by Kimberly Rocha at 3:36 PM