A Month of Cowboy Lovin' ~ The Circle Eight: CALEB ~ by Emma Lang 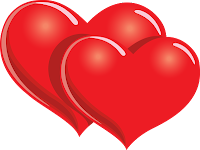 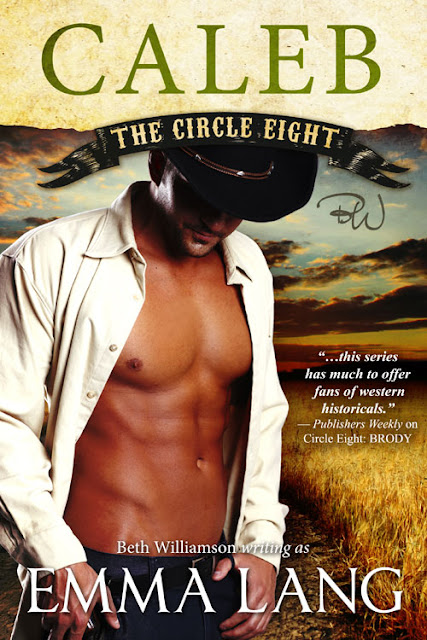 WELCOME TO A MONTH OF COWBOY LOVIN' BLOG TOUR
TO CELEBRATE BOOK 3 IN THE CIRCLE EIGHT SERIES: CALEB & Ebook GIVEAWAY

The Circle Eight: Caleb, the very much anticipated third book is Beth Williamson, writing as Emma Lang's Western Historical Romance series, releases on February 13, 2013 with great fanfare. If you have not read any of the books in the series, here's a little tour through THE CIRCLE EIGHT 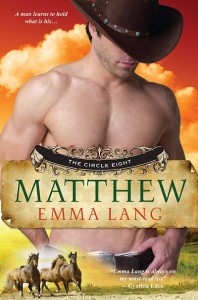 Matthew Graham, the oldest of the passel of eight Grahams is left to care for his siblings after the murder of his parents, and the disappearance of the youngest sibling Benjy.  The Circle Eight is in jeopardy though and Matthew is left with a dilemma. In order to hold on to the Circle Eight and make the ranch prosper, he must marry in 30 days. This is where town’s girl Hannah Foley comes in to play. Quirky Hannah never thought of marriage or even a large family, but that doesn't stop her from helping Matthew out and in the process getting way more than they both bargain for. 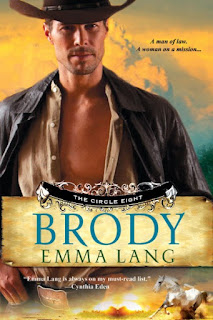 We first met Brody, a Texas Ranger, and Olivia Graham in MATTHEW. Olivia, outspoken and sometimes overbearing, she has never been the same since Benjy disappeared. When the brooding Brody, who has been searching for clues to the youngest Graham’s whereabouts, sets out to try to find the boy, stubborn Olivia follows. This book is a revelation for Brody as well as Olivia and they journey these two take is an eye-opener and one of my favorite books. 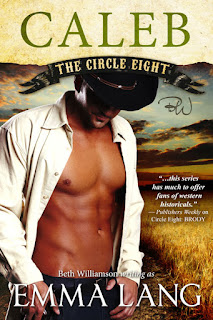 A Texas Ranger, a lady blacksmith, a fierce passion, a dangerous game.
Caleb Graham has spent the last four years in too many dangerous situations to count. As a Texas Ranger, he knows no fear, or at least he never shows it. When he’s sent to force a blacksmith off government seized property, he runs face to face into the woman who will change his life.
Aurora Foster grew up on the very land the obnoxious Ranger is trying to throw her off of. Her parents and her husband died for it and there is no chance she would leave without a fight. A lady blacksmith might be an anomaly but she has the strength of the steel she forges and the courage to fight for what she believes is right.
When Aurora is inadvertently injured by Caleb, he seeks medical help from a neighboring ranch. The sprawling hacienda is full of the finer things in life and the one person Caleb never expected to see again… his youngest brother Benjamin. Forced to flee from a man who has kept the boy captive, the trio become traveling companions in a deadly game where no one wins.
Life turns upside down and sideways for Caleb and Aurora, caught in a game neither of them expected while they desperately try to save the boy who was lost to his family. Pursued and hunted, the three of them ride for the Circle Eight ranch. The unlikely pair of rescuers fight their attraction and for their lives.

About two years ago when I first met Beth Williamson in person at my first Lora Leigh’s RAW weekend, I was given the first book in the
Circle Eight Series, Matthew to read. I was new to the whole Western Romance genre at the time and had just read a few short stories to get acquainted with Beth’s work.

When I returned home from the conference and delved into Matthew, I was so taken with this story. To this date, and 3 books into the Circle Eight series, I feel like a part of the family and eagerly await each book like a child waiting for Santa Claus at Christmas. 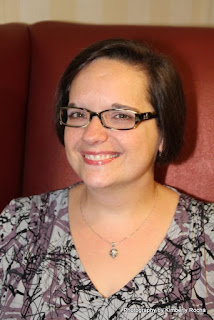 GIVEAWAY ALERT!!!!
WIN AN Ebook Of THE CIRCLE EIGHT: CALEB
COMMENT TO BE ENTERED