MICHELLE BOONE'S REVIEW OF VIPER ~ SONS OF SANGUE BY PATRICIA A. RASEY 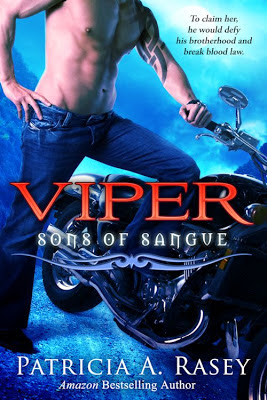 Kane 'Viper' Tepes is one of the oldest living descendants of Vlad III. Vampirism is in his blood. So is being the President of the Sons of Sangue. Those who break motorcycle club rules that protect their coven are dealt swift punishment. No exceptions. Until one pretty little detective has him compromising his beliefs, and endangering his position as head of the MC.
Vampirism had Cara Brahnam turning tail and leaving behind her life in Pleasant. Now, ten years later, she's back as lead detective and wants to see the person responsible for draining the women of Lane County brought to justice, no matter what deal the gang of miscreants has struck with the sheriff. Or the fact that her number one suspect is the sole reason she fled in the first place.
Now someone has targeted Cara as the next victim and Kane must join in the hunt to find the ancient vampire that wants her dead.

In this very intriguing story Miss Rasey builds a world within our world. She gives such vivid descriptions of each and every character, that as a reader you can picture clearly what each man and woman looks like. The alpha hero is so incredibly gorgeous and arrogant you want to smack him and at the same time be the heroine who gets to kiss him and so much more. The heroine, Cara, is his match in every way. When Viper finally falls and falls hard for her, you can’t help but sigh in happiness. Add in he has a twin, and several other members of his group, and you can’t help but want more.
I was hooked from the very beginning with the opening scene of the book, all the way to the very end. She mixed in all the things I think makes an incredible story. A great plot. Hot men. Danger. And incredible sex with said hot man J. By the end of the story Miss Rasey had me thinking about the next book, then the one after that and so on. I sincerely hope she has already started on Viper’s twin Kaleb’s story, because I can only imagine it is going to be another great, steamy read.