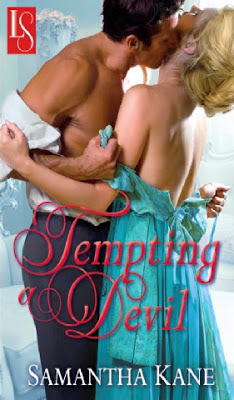 Having read Samantha Kane's THE DEVIL'S THIEF at the end of 2012, I was so eager to to read the second book in her series TEMPTING A DEVIL. This series is not your ordinary Regency Romance, these books are sizzling and provocative.

In TEMPTING A DEVIL, we  meet Harriet Mercer, who after marrying up, but to an older and uncaring man, contentedly becomes a widow several years later. Harriet has a beautiful son from her disastrous marriage albeit not in  the traditional way, and will do anything to protect him. Since her arrival in London, she has been plagued by the unlikable Mr. Faircloth, who wants to marry Harriet in order to possess who wealth. Harriet decides on a plan to thwart Faircloth efforts. Since Faircloth's father would only accept a bride with a stellar reputation, Harriet has concocted a scheme to diminish hers. She wants a lover to ruin her reputation, but also to learn from because Harriet's marriage was a desolate misadventure that left her wanting.

Enter indomitable Rogue, Roger Templeton, a man with a less than stellar reputation. He lives day to day and by the kindness of friends and the generosity of his conquests. Roger and Harriet were childhood friends, long separated by the time he spies her attempting to seduce a man at a party. Before he realizes that it is his childhood friend, he is attracted to the beauty and desires her for his extracurricular activities. When Harriet sees Roger as the perfect Rogue for her purposes, Roger is uncertain he wants to fulfill her needs. As tempting as Harriet is to Roger, and vice-versa, they are not meant to be. Roger is the ultimate rogue with no means to live and Harriet wants never to be tied down in an unhappy marriage again.

When Roger thwarts a would-be kidnapping of Harriet's son, he finds a few reasons to have Harriet in his sights and those luscious curves and her sultry beauty have him falling. He harbors some animosity that Harriet marry for money, not knowing the circumstances, nor did he know that Lord Mercer could not father his own child so he had Mr. Faircloth do the deed. Getting Faircloth out of her life without forever damaging those around her part of the charm of this great story.

TEMPTING A DEVIL by Samantha Kane is a great follow-up in the Saint's Devils series. Ms Kane's interesting cast of characters add to the allure of the story. Roger Templeton, although the rogue, shows a side to him that no one expects, especially where his childhood friend is concerned. Harriet has overcome great adversity in her short life, become a loving mother and a force to be reckoned with. I hope you all give Samantha Kane's,  Saint's Devils series a go. TEMPTING A DEVIL is a compelling read.