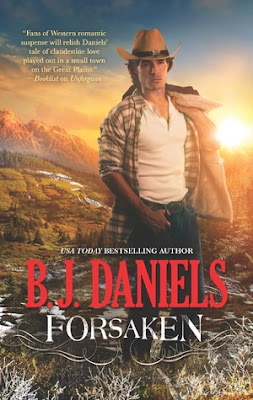 A fan of the Beartooth, Montana series from day one I again was beyond happy to have a chance to read the third installment, FORSAKEN before its release date. FORSAKEN by the ultra gifted B.J. Daniels  grabs the reader's attention from the first paragraph with her knack for suspense and keeps the reader enveloped in her mystery until the very end.

Bentley Jamison is the new kid on the block. The handsome lawyer from back East comes to the West as Deputy Sheriff for the town. Sheriff Frank Curry is away to see the daughter who was  institutionalized for trying  to kill her own him. While Curry is away tragedy strikes. From out of the mountains races sheep rancher, Maddie Connor's young tender Dewey, terrified out of his mind about what just happened up in the mountains, where he and sheep herder, Branch, we tending Maddie's flock. The boy appears with blood on him and says he can't recall all that happened.

Maddie Curry is the last of a dying breed of sheep ranchers Even after she loses her husband and son in an avalanche she, continues what she believes is her legacy, but with her dear friend and sheep herder, Branch missing and possibly dead, Maddie knows her days as a rancher are numbered. When she meets Deputy Sheriff Brantley Jamison she scoffs at him, thinking that because he isn't from the area that he is completely out of his element. The two set off on a difficult trek into the mountains with a bad snowstorm nipping at their heels to find Branch and see to Maddie's flock. Maddie soon finds herself wrong about the handsome Deputy and at the same time attracted to him during their misadventure.

In the meantime, back in town, store owner Nettie Benton, who has been in love with Frank Curry for years, still finds herself being pushed away by the love of her life and she's finds it becoming tiresome.  When bad boy of old, J.D. West comes back to town after a very long sabbatical, Sheriff Curry finds the need to watch his back because J.D. has eyes for Nettie. When J.D. saves Nettie's life after she is almost run down by someone from Frank's past, J.D. finds himself as savior to Nettie and possible paramour.

While Deputy Jamison and Maddie try to solve the mystery up in the snowy mountains, Sheriff Curry deals with his own issues. When the past becomes a danger to his future Frank needs to decide what is more important, settling scores or his relationship. Jamison has a similar dilemma with the refreshing yet stubborn widow. Maddie and Brantley still dwell on their pasts, but their emerging feelings for one another can overcome anything if they can just get through the storm.

I honestly don't know how this woman does it. B.J. Daniels can write several stories going on at the same time and keeps the reader enthralled with it all. There is a lot of nail-biting and gasping that goes on from cover to cover. So much more happens on in FORSAKEN that I can't even begin to  tell you about because I don't want to give anything away. Just know this, FORSAKEN by B.J. Daniels,  is well worth picking up.  Ms. Daniels to me is a Goddess of Romantic Suspense and I tip my hat to her for giving us another well written and intriguing saga.  In addition, the romance that occurs between these mostly, what are considered middle aged men and women are so refreshing, they make me smile from ear to ear. Finally, someone who understands that not just twenty somethings can have gripping romantic interludes and knows that love can be found at any age!  Now if she will only give my two favorite characters their day in the sun, I will be a very content reader, until then, I guess my nails will be nubs. Pick up your copy of FORSAKEN by B.J. Daniels when it releases on September 24th and if you haven't read the first two books in the Beartooth Montana series, UNFORGIVEN and REDEMPTION, or the Prequel to the series, FALLEN, you got your work cut out for you because I recommend them all highly! 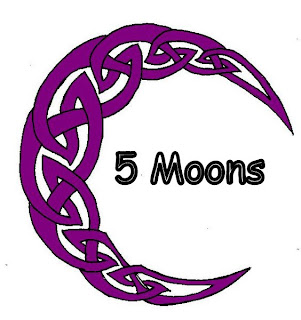