CROSS THE OCEAN by HOLLY BUSH 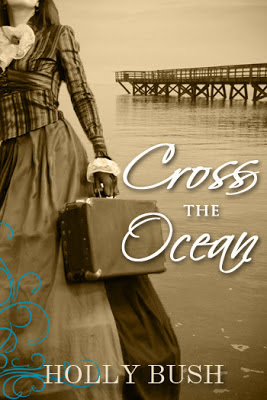 Holly Bush is one of those authors who once you find, she's on your "must read" list forever. Her stories are always unprecedented and fresh. Her book Train Station Bride was the very first mail order bride romance I ever read  and loved. Once I read that, I flew through Romancing Olive and Reconstructing Jackson, both amazing stories from an amazing writer.

In Cross The Ocean, Blake Sanders, the stodgy Duke of Wexford has just been summarily dumped by his unhappy wife. The Duchess has had it with the unloving and inattentive husband who has also flaunted his mistress in public. So Ann, the Duchess, leaves their three children with their complacent English Duke father and runs away with a Scottish merchant , leaving Blake angered and shocked.

When Blake seeks out his best friend, Sir Anthony Burroughs and his wife Elizabeth's consolation he is taken aback when he meets a cousin of Elizabeth's from Chicago. Gertrude Finch is a thirty-two year old brash and outspoken suffragist who stands for all that the Duke of Wexford finds ridiculous, but something brews between the opposites, enough that has the proper Blake steal a kiss from the unusually tall Gertrude. Miss Finch  finds Blake to be arrogant, cocky, a poor choice for a husband and a lacking father and she doesn't keep quiet about it either. Sparks consistently fly with the American and the Brit even when they are embroiled in arguments and name-calling.

The Duke of Wexford's daughter, Melinda, is set to have her coming out, but without her mother present, Blake seeks help from Elizabeth with taking care of his only daughter's season, but Elizabeth is expecting a child and her Anthony would prefer someone else see to the task. Much to Blake's chagrin, Elizabeth suggests that Gertrude assist, but the constant presence of the American turns his world upside down. When the passion becomes too much for Gertrude to handle, she sets sail once again, to her homeland, but in the process, picks up a surprise package in the form of the Duke of Wexford's heir, fifteen year old William. Now both William and Gertrude wonder who will be sent across the Atlantic to retrieve the prodigal son.

Completely out of character, Blake sets off to America with his trusty valet in tow. The adventures and misadventures this unlikely pair endure change their lives forever. Whether the change is for the better or for worse can only be revealed by reading Holly Bush's extraordinary tale, Cross The Ocean.

Well once again, Holly Bush has a winner on her hands. Bringing together the stiff British aristocracy with the boldness and the novelty of the American Mid-West is such a treat in Cross The Ocean. Blake is unlikable and unyielding until the " Amazon from America " has her way with him. In Cross The Ocean, Blake will learn which is more important to him, the love and trust of  his family, or the pride in being England's elite. As with all of Holly Bush's books, I was unable to put Cross The Ocean down until the last page. I highly recommend this historical novel to any and all. I hope those who take a chance on this trip across the Atlantic and back enjoy it as much as I did, because it is so worth the ride.

I HAD THE PLEASURE OF MEETING HOLLY BUSH AT RT IN KC
HERE SHE IS ON THE LEFT ALONG WITH MY OTHER FRIENDS, Marianne Strnad, Me, Monica Burns, Lynne Connolly, Beth Williamson and Valerie Cozart 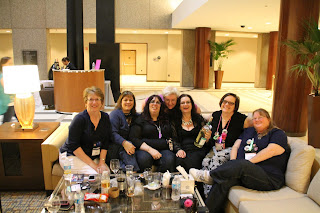 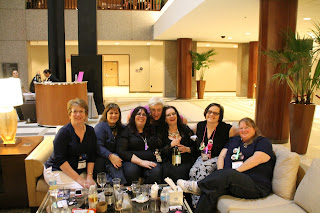 Posted by Kimberly Rocha at 7:02 AM