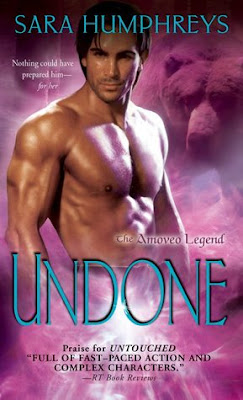 If you haven’t read the first 3.5 books in this series then stop reading right now. While the first 3.5 books may work well as a standalone book, book 4 changes the game! This is the tale of Marianna (Purebred Amoveo) and Pete (Purebred human... or so he thinks). When we first meet Marianna of the Kodiak Bear Clan, in Untamed, she is shocked to learn her father’s true role in the Purist Movement (Purist; noun; group of purebred jerkfaces who feel that Amoveo’s should not mate with anyone other than Amoveo’s; i.e. Hybrids, Humans, Other Supernatural Beings, etc.) and now that the Purists have been revealed, runs away to New York to make up her mind about which side her loyalty lies. She hangs out in a club in Manhattan run by vampire Olivia and her coven (but that’s a horse of a different color) Now her twin brother Dante is mated with Kerry, a hybrid from the Panther clan, and while she loves her brother, she isn’t sure how she should feel. So Dante hires his friend Pete to protect his sister from both her own reckless behavior and the Purists. Sparks immediately fly between Marianna and Pete which confuses both of them. Up till now, she hasn’t found her mate yet, either in real life or in the dream plane (Amoveo’s first connect with their mate in the dream plane which strengthens the psychic bond that they share). Now Pete pretty much just thinks he’s got the hots for her and she could never love a guy like him, after all, he is just a human and not her mate. Well, they are both in for a rude awakening when they find out that things aren’t always as they seem. Ya see Pete, well, Pete is... special... and not fully human, and he isn’t a shifter either... can’t tell ya what he is cause that would give too much away but let me tell you that when you find out, you better hold on to your britches cause they are going to get blown off!!!! This story has everything... romance, intrigue, drama, sex (OMG the sex... we are talking on a snowmobile in the middle of winter!!!), mystery, suspense, action, secret babies... I laughed, I cried, I feel like I ran a damn marathon! Sara Humphries has truly created her own world. Her next book to be released is Tall, Dark and Vampire, which is a spin off to vampire Olivia’s story and I can’t wait to get my hands on that in August. I give this a very enthusiastic 5 stars and will be telling anyone and everyone who listens to me to give it a read, they will NOT be disappointed!

5 Stars (Hook Line and Sinker)
Posted by Kimberly Rocha at 12:00 AM