AN ENGLISH BRIDE IN SCOTLAND by LYNSAY SANDS 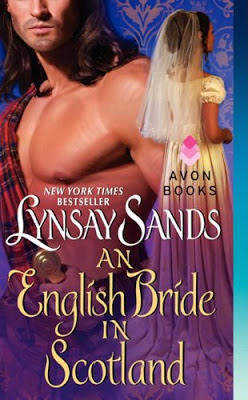 Having been sent to a convent when she was merely a child, by her seemingly unloving parents, Annabel, aside from some "behavioral" issues, was well on her way to taking the veil, until an abrupt and surprise visit from her mother after fourteen years. Annabel soon realizes that her mother has plans for her and they aren't out of love for her daughter either. Annabel, in place of her sweet, demure and perfect sister, is to marry a great Scottish beast, Ross MacKay, and why does Annabel have to be sacrificed? Her lovely sister has disgraced her parents and run off with the stable master's son. So instead of being a bride of the church, Annabel is set to become the bride of Ross MacKay.

Ross MacKay has set off to his prospective bride's holding with several of his trustworthy men. He soon finds out that  he is being tricked by Annabel's parents, but upon seeing her innocence and beauty, decides to marry her anyway, and once he sees that her parents are not the nicest of people, Ross whisks Annabel off to her new home is Scotland.

Unfortunately, no happily ever after ensues, for Annabel finds herself in harms way more than once on her journey and upon arriving in her new homeland. When Annabel's runaway sister shows up on her doorstep, begging forgiveness on one hand, and flirting with Ross on the other,we find things are not as they should be. Even though it was pre-ordained for Ross to marry, he does his best to make Annabel aware that he will be a good and caring husband. Annabel, on the other hand, hasn't had  much to do with the outside world. She is innocent in many ways and also feels the sting of her parent's rejection still after fourteen year. She in no way sees herself as bright and beautiful as those around her do, and even tries to fight the feelings that Ross has for her, even those she bears for him.

An English Bride in Scotland by Lynsay Sands has all the makings of a fast paced historical romance. Ross and Annabel are fabulous characters with such depth and feeling. In a time, where there are so many Scottish historical romances out there, this one stands out for its romance, its antagonists and its tale. Ross' protectiveness of his new bride from the first leaves an impression and Annabel's sense of humor and her inquisitiveness makes her a great heroine. I thoroughly enjoyed Lynsay Sands An English Bride in Scotland and I think you will as well.