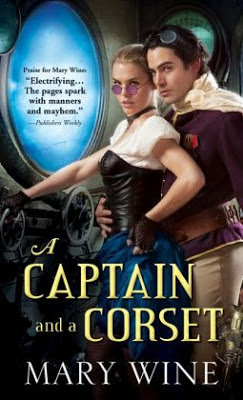 MAMAWOLF'S REVIEW OF A CAPTAIN AND A CORSET

A Captain and a Corset takes place just after the end of  A Lady Can Never Be Too Curious. Sophia Stevenson has been exposed to a Deep Earth Crystal Root Ball and has endowed her with the ability to see gates that will allow an airship to shortcut across the globe. This makes her a very valuable person to both the Illuminists and to the Helikeians. First she must be trained how to use her powers and is put in the hands of the very handsome though rough around the edges Bion Donkova. The attraction between the two is almost immediate, though they are in denial about it. Sophia is kidnapped by Grainger who is a very ambitious Helikean and she is taken to an airship to become their navigator. Bion  devises a plan to rescue Sophia and finally gets to the airship she is being held on. When she asks how they are going to get off the airship Bion says he had not really thought that far ahead. The adventures that they encounter take them from the airship to a caravan of Roma gypsies. They are hidden among the gypsies and their love begins to take shape. They have to keep moving hoping to find an Illuminists Solitary Chamber. Through out all of this they are being looked for by both the Helikeians and Illuminist Hunters Decima and Lykos (who have to have a story coming). Information is bought and sold for any information that will lead them to Sophia and Bion. There are some very interesting characters that want to get their hands on the navigator and her companion, who has had something happen to him that makes him just as important to capture.

I have enjoyed getting to follow these characters and their world. If you want to go on an adventure that will feel like a swashbuckler/pirate story with a twist I think you will really enjoy this book. I recommend this book A Captain and a Corset and the book before A Lady Can Never Be Too Curious. Loads of adventure, lust and Hot Lovin!!!

a Rafflecopter giveaway
Posted by Kimberly Rocha at 3:52 PM