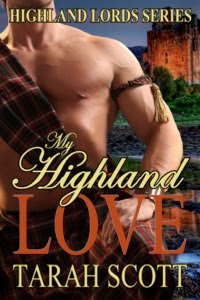 How does a woman tell her betrothed that she murdered her first husband?

Elise Kingston is a wanted woman. Nothing, not even Highlander Marcus MacGregor, will stop her from returning home to ensure that the man responsible for her daughter’s death hangs.

Until she must choose between his life and her revenge.

"Will you come to the great hall?" Elise asked Michael when they passed through the castle gates.
"Aye," he replied shortly.
"Michael," she began, but he pulled his horse to a halt beside her and dismounted.
He came around to her and helped her from the saddle. "Go on." She hesitated, and his eyes softened. "I'll be along after I have seen to the animals."
She pressed a kiss to his cheek. "You're a good man, Michael MacGregor."
He shook his head, but she could see that he was pleased. He limped off leading the horses, and Elise headed for the great hall. At the postern door, she entered and saw Marcus standing near the hearth. He broke off his conversation with the two men who stood with him and glanced over his shoulder. The drawn look on his face snapped into a dark scowl. He started forward. Elise faltered when she saw he meant to intercept her. His companions disappeared up the nearest staircase and a hum of apprehension began deep in her stomach.
Marcus rounded the table and reached the midway point when she blurted, "Good afternoon, Marcus. How are you?"
"Where have you been?" he demanded.
"I—" She fell back an unsteady step when it seemed he would ram into her. He halted three feet from her. "I have just returned from visiting Michael."
"So I was told," he replied curtly. "Winnie's warning did nothing to deter you?"
"Winnie's warnin—" Elise recalled her encounter with Winnie that morning. Good Lord, Winnie had told him she saw her leave.
Marcus's eyes narrowed. "Aye, you remember. Fortunately for you, I only just discovered your absence. Unmanageable wench," he added in a dark voice.
"You have your answers," she shot back. "Why bother asking?"
"Because I couldn't believe you were traipsing about the countryside."
"I was not traipsing about the country. Not that it's your business."
"It is my business—and I will see to it you no' do it again."
She ignored the warning bell the definite hardening of his brogue set off inside her head. and said, "You're insane if you think I'll be ordered about."
"Ye will do as you're told," he said in a quiet voice that was perversely more unsettling than a shout.
"I come and go as I please, just as everyone else at Brahan Seer."
A keen light shone in his eyes. "If you will note, the women are staying close to home." His expression hardened. "At the express command of their men."
Elise gasped, then glanced past him, gauging the distance between him and the freedom the kitchen offered. He stepped closer and her temper flared. She raised her hands to shield herself from his advance and her palms met the unexpected warmth of his chest. She gaped at her fingers splayed across tanned skin where his shirt lay open, and her senses reeled at the raw power in the heavy rise and fall of his chest.
"Lord," she whispered, and yanked her hands away.
The vague realization that strong fingers had gripped her wrists was overshadowed by the jolt she felt when Marcus forced her hands back to his chest. Her mind screamed to break free, but the sight of her palms gliding over his dark skin—the need to touch every contour, to know intimately his powerful body—held her rooted to the spot. She tore her gaze from his chest and looked into his eyes. The fire blazing there drew her—commanded her—and she leaned into him.
"There ye are, lad. I was just look—"
Elise twisted as Cameron reached the bottom of the nearest staircase. He lifted a bushy brow. She looked back at Marcus. His hold loosened and she snatched her hands away. She retreated, stumbling over her own feet. Marcus reached for her, but she dodged his hand with another unsure step backward.
"I-I must go," she stammered, and fled the room.
"Elise—bloody hell!"
Marcus's voice echoed off the stone walls as she shoved through the postern door.

My Highland Love, the first in the Highland Lords series, is on sale for .99 Thursday, June 6 thru Sunday, June 9.


AMAZON
Posted by Kimberly Rocha at 12:00 AM