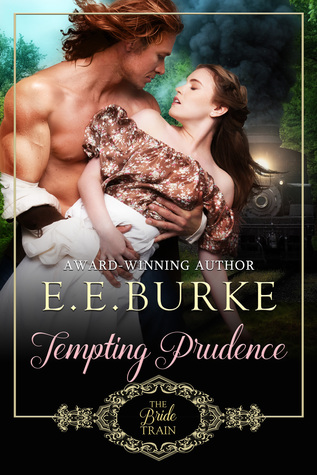 Prudence Walker has been settling in pretty well at the Centralia Settlement in Southeastern Kansas when she is abducted right from the hotel kitchen where she has been working and thrown into a coffin on the back of a wagon. Terrified out of her wits, Prudence has no idea if she will survive. The spinster had high hopes of finding herself a husband when she arrived on the Bride Train but as the other woman before her have found their Happily Ever Afters, Prudence still is searching.

When Archer Childers misguided brothers show up at his doorstep with an unwilling bride, he must make things right before they all land in prison, but a bungled attempted escape leaves Prudence unconscious and injured, Arch needs to nurse her back to health and convince her to marry him.

The plot thickens when Prudence, although taken in by the handsome bounder whose sly smirk could melt an iceberg, is certain the pair just won't work. When she learns of his profession, Prudence is more determined to run the other way due to her staunch Christian upbringing and ideas.  Before Arch realizes it, he has fallen for Prudence, but breaking through her steel exterior is a harder than he ever thought possible.

I simply love E.E. BURKE'S  Bride Train series. It's well written and exciting with TEMPTING PRUDENCE as no exception. I adore how Arch opens Pru's eyes to look at herself for the woman she is and put behind her the unfeeling words and actions those in her past said and did to affect her so. Arch is a patient and understanding hero. When his brothers essentially break the law and kidnap Prudence, he's left with the aftermath. TEMPTING PRUDENCE is a great addition to E.E. BURKE'S Bride Train series and I look forward to the next one!