The Earl's Return by Callie Hutton 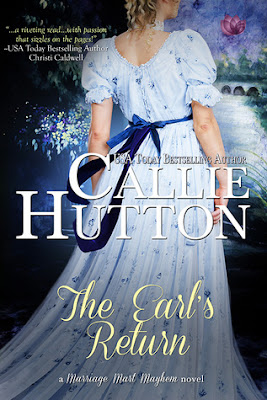 Two weeks before his wedding, Darius, the Earl of Redgrave leaves his betrothed bride jilted while he flees to marry another under nefarious circumstances. Now, four years after the incident and his wife's death, Redgrave is back in London to choose a wife. Redgrave has some idea of what he wants in a wife, but no one compares once he sees Lady Mary.

Shocked and dismayed that the Earl of Redgrave would have the gall to show himself in town after his ruination of her sister, Lady Mary is perplexed when she can't get him out of her head. The cad left her sister two weeks before the wedding. Granted, out of that scandal, her sister found her one true love, but the journey there was a bitter one that the family is scarce to forget.

Avoiding Redgrave is impossible since he has taken on the the charitable task of helping out in the orphanage where Lady Mary also works. Those evening delights of ton balls and gatherings don't help much in the avoidance realm either.

Once Mary begins to see the man inside the handsome exterior, she wonders if what happened those fateful four years ago was entirely William's fault. Secrets between them keep one another at arms length but when those secrets begin to come to light William's protective side take over and he will risk it all to make sure that Mary isn't hurt again, even if he must take himself out of the equation.

Mary is wary of giving her trust to another man after an incident with another man left her skittish of men in general, so while she begins to open her heart to William, that incident years before comes to the forefront, when the bounder from her past reappears making her rethink her relationship with William.

THE EARL'S RETURN is the final book in the Marriage Mart and Mayhem series by Callie Hutton, but can be read as a stand alone. This book is an enjoyable and well written read that will make you run the gamut of emotions whilst watching William and Mary reach for their HEA.

Posted by Kimberly Rocha at 5:00 PM