The Book That Changed My Life 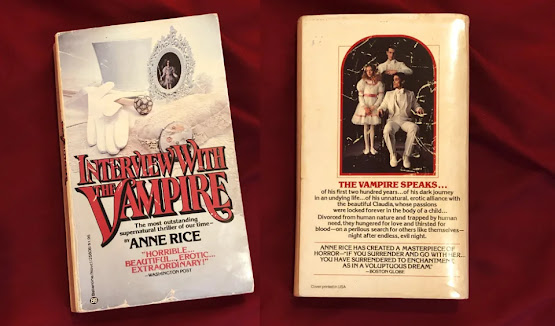 I taught myself to read at five years of age by thumbing through the TV Guide that my mother always had in the house. I moved on to Nancy Drew, The Hardy Boys and Little house on the Prairie and devoured any book I could get my hands on.
The year was 1978 and I was ten.   A neighbor around the corner was having a garage sale and I was curious. Looking through the pile of books she had on display, I came across the above copy of Interview With the Vampire by Anne Rice and I was fascinated. I had always been a fan of horror movies since I was very young. I used to spend the Summers with my grandparents and while they were sleeping, I would sneak to the living room to watch Christopher Lee's Dracula and anything Vincent Price. I was a Chiller Theater kid who craved the dark. Granted, I would scare myself  that once I remember having a nightmare about a vampire that I ended up in my bathroom clutching a cross until sunrise, but that only gave me more resolve after to seek out more darkness.
This copy of Interview of the Vampire came home with me for the bargain price of a quarter and I quickly ensconced myself away in my bedroom and began my foray into the world of Anne Rice. Lestat, Louis and Claudia were my crack and re-read that book  a dozen times before I realized that there would be more. By the time The Vampire Lestat was released mid 80's, I had already wandered into the world of Stephen King, with Salem's Lot being my favorite. Once the Vampire Chronicles became a series, I was a true fan who made my trek to my local bookstore every release day to grab the next.
My daughter was born in February of 1989 and she was named after Gabrielle de Lioncourt, Lestat's mother. Funny though, when I told Christopher Rice that I had done this, he told me that Anne actually disliked Gabrielle. That didn't matter, that name helped make my daughter the badass she is today and much like the character in The Vampire Lestat, she is a strong and confident woman.
I credit Anne Rice's Vampire Chronicles for making me a devoted reader, a lover of books. Each and every word that was put to the page  was revered and remembered. This series gave me the base for my reading habit for a lifetime. I have shared Interview With the Vampire from the age of ten until it became a book pretty much everyone around me has read. I have had the extreme honor of meeting Anne Rice a few times before her passing and these meetings were most definitely a highlight to my days. I have met most of my favorite authors, but I will always cherish meeting Anne, who to this day is the top of my list of favored authors.
What book changed your life?
~KIMBERLY ~ 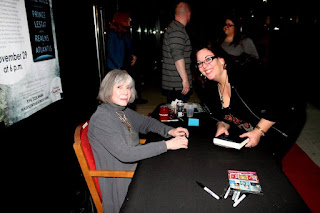