THE DEVIL'S THIEF by SAMANTHA KANE 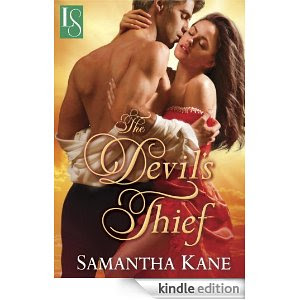 Sneaking into her neighbor's bedroom to steal his famous Stewart Pearl, Julianna Harte gets caught red handed by the handsome Alasdair Sharp. When Alasdair bargains with the thief he can barely see in the darkness of his abode,  the Stewart Pearl for a night in his bed, Julianna does the unthinkable. In the light of day, Alasdair awakens to an empty bed and the pearl of course gone. Alasdair, having no intention of allowing his family's treasure to disappear since he really did not mean to give the pearl to his thief, calls upon the help of his friends to search for his "Juliet"

Julianna Harte is the daughter of an ex- thief who, since his recent marriage to an older woman has given up the craft. Julianna sees no remedy but to sell the Stewart Pearl to pay the rent on a foundling home she is in charge of. All she can think of is the poor children who have been orphaned or abandoned on the homes steps. Hmmm, but is that her only motivation? After all, she has been in Alasdair Sharp's company, and the man has hardly noticed her.

When Julianna sells the pearl to a career criminal, she must deal with the aftermath as Alasdair and his friends are not ignorant nobility, for they know her identity. When Alasdair confronts the plain Julianna, sparks continually fly when these two are in the proximity to one another. Julianna soon realizes that she has done wrong by Alasdair and wishes to make up for hr theft, while Alasdair has other plans for Julianna.

What an awesome read!!! I loved this story and can't wait for Samantha continue on with the colorful cast of characters like Wiley, Roger, Hil and even Alasdair's cousin Ernest. Each of these great characters have some awesome quirks that make them memorable. I loved the hero and heroine. At first, the reader thinks Alasdair a rake but soon find out otherwise, and Julianna is no shrinking violet as we find from the steamy scenes between she and Alasdair. The fact that these two can hardly keep their hands off each other but still be unsure of what they mean to one another is artistry. Bravo Samantha Kane, for I loved the Devil's Thief and await with bated breath for Tempting a Devil.