GUEST BLOGGER, Lisa Marie's review of Laura Kaye's ONE NIGHT WITH A HERO 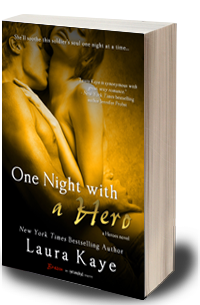 One Night with a Hero by Laura Kaye is the second book of her Heroes series.  Now if you like hot military men and even hotter love scenes, then this is the book for you.  We first meet Army Special Forces Sgt. Brady Scott as an overprotective big brother in "Her Forbidden Hero" and only scratch the surface of just how damaged he is. Growing up with an abusive alcoholic father caused him to take on the role of protector to his little sister and all but robbing him of a childhood.  He vowed that he would never have kids for fear of turning into his father.  While on his daily run, he spots Joss Daniels, our just as emotionally damaged heroin in a moment of vulnerability.  Orphaned as a child she was passed on from foster home to foster home, never finding a family of her own.  Of course he is immediately drawn to her, not only for her beauty, but I think he sees a bit of his damage reflected in her.  Her scars have caused her to become the polar opposite of Brady, where as he never wants children, she wants a large family of her own.  The roller coaster romance that ensues will not only leave you at the edge of your seat waiting to see what happens, it will also at times leave you breathless with the wallop of emotions being thrown at you.  I don't want to give too much away (secret baby), but trust me when I say that there is a love story of epic proportions wrapped up in a sweet and sexy package.  You will not want to put this book down (oh who needs sleep, I can sleep at work) and it will leave you begging for more (what do you mean it's only 230 pages... I could go at least 100 more thank you very much).  So put the kids to bed, pop a bottle of wine, and make sure that your husband/boyfriend understands that there will be times that he will be thanking Ms. Kaye for lighting that fire.