His Mistletoe Bride by Vanessa Kelly 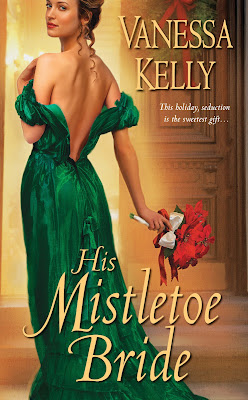 When Quaker, Phoebe Linville is summoned by her maternal grandfather to England to live, she is arrives to to find her grandfather has just passed away. Retired- soldier, Major Lucas Stanton has inherited the earldom from Phoebe's grandfather. The deceased earl made Lucas promise to take care of Phoebe in any way he possibly can, which could include marriage to the seemingly plain woman. There is much more to Phoebe than meets the eye as Lucas finds Phoebe not only to be so different from most other women but she is a contradiction to her Quaker ways as well.

When Phoebe is introduced to Lucas, he immediately and quite without feeling suggests that she marry him to protect her, but Phoebe isn't going for that. She attempts to steer away from being a burden to the earl until they are caught in a compromising position and the inevitable comes about. After the quick marriage, Lucas and Phoebe return to Mistletoe Manor to begin their lives and set to repair Mistletoe Manor and its village.
Everything is in such disrepair since the old earl halted taking care of everything that Lucas is almost overwhelmed.

Phoebe's and Lucas's wedding night is disrupted when the authorities come pounding on the manor's door in search of smugglers who have been using Lucas's land as a route for their criminal activities. Worse still, tension abounds when Phoebe and Lucas argue over the smugglers, who are their own villagers. It doesn't help that Phoebe is in constant doubt over her relationship with her husband and his lack for expressing his true feelings for her.

I truly enjoyed his Mistletoe Bride by Vanessa Kelly. This is my first read by Vanessa and I look forward to reading more by her. I did however have an issue with the constant doubt of Lucas and his feelings for Phoebe. I wanted to continually grab a hold of Phoebe and shake some sense into her. The knowledge that Lucas had been spurned so terribly in his past did not stop him from doing what was right and even if he never voiced his feelings, they were quite obvious by his actions. All in all, His Mistletoe Bride is quite  memorable, and I do recommend this holiday read.

Posted by Kimberly Rocha at 7:54 AM