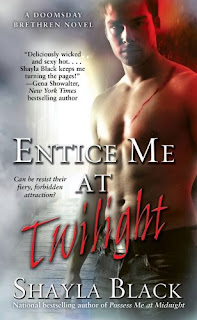 Entice Me At Twilight
Doomsday Brethren Series, Book 4 – Duke’s story
Genre: Paranormal/Urban Fantasy Romance
Release Date: October 26, 2010
Hey Guy's this Is Joey and the book of the day is Entice Me At Twilight by one of the best writers out there. Mrs. Shayla Black!! I have read a lot of her stories and have fell in love with each character. E.M.A.T is book four of the series and Released October 26, 2010. I had this book read in one day. This story is about Simon Northam, Duke of Hurstgrove AKA Duke. I really enjoyed his book, he was one who kept you on your toes. For anyone who hasn't started this series yet here is a little catch up of the series. The Doomsday Brethren is a group of wizard who try to keep all Magic kind safe. Mathias d’Arc is trying to cause havoc around the magic world and the Doomsday Brethren needs to stop him,But can they??? If you are into Witches and Wizards and more, then this is a series you must try. They will have you hooked from book one! Here is the write up for Book 4 Entice me at Twilight!!

In national bestselling author Shayla Black’s electrifying new novel, the Doomsday Brethren fight their mortal enemy for the newest weapon in a bloody magical war: the only woman a magical warrior shouldn’t claim…and the one he can’t resist.


Dangerously handsome Simon Northam, Duke of Hurstgrove, and his uptight barrister brother hardly get along, but crashing Mason’s wedding and stealing his fiancée take sibling rivalry to a new level. Duke’s family knows nothing of his magical prowess or the Doomsday Brethren, so how can he explain that mankind’s fate lies with the beautiful, tenacious bride he longs to seduce for himself?


Felicia is an Untouchable, a rare human whose presence disables magic—even the impenetrable forces surrounding Morganna le Fay’s tomb. The evil witch’s malicious powers could propel nefarious wizard Mathias to ultimate world domination . . . if he can resurrect her. To conceal herself, Felicia must heed her simmering desires to mate with Duke, but he risks binding his life—and sanity—to a lover whose loyalty may be forever torn. He faces a terrible choice: betray his brother for ultimate survival . . . or lose the woman who tempts him beyond control.

Check out all The Doomsday Brethren Series here at http://www.shaylablack.com/books.html#doomsdaybrethren

Good evening readers! It's Kimberly. I just wanted to put my two cents in with Joey's awesome post about this book. I have to say that "Entice Me At Twilight" by the very talented Shayla Black is my new favorite of the Doomsday Brethren books. "Duke" is my favorite warrior and he really shined here. Felicia is the perfect heroine for Simon. I'm hoping all of those eager readers who have never given Shayla Black a try go out and buy this excellent series. Happy Reading :-P.