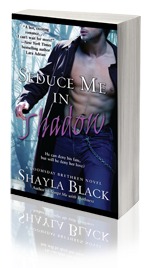 Seduce Me In Shadow Doomsday Brethren Series, Book 2 — Caden’s Story was just as good as book 1 but just keeps getting better each book. Caden was a great story to read. When Caden's brother Lucian gets sick, Caden comes home, but he is one that does not like practicing magic. So with everything that is going on will he stay with his human life or will he finally embrace his wizard sides? Caden is one story that your heart just pulls for him because he is now stuck in a hard place.You just want to reach out and help him. I hope you enjoy book 2 as much as i did and if you read it how did you like it? Here is the write up on it. Enjoy!

When a villainous wizard escapes from exile, the devastatingly sexy Doomsday Brethren must defend all magickind in the spellbinding second book in bestselling author Shayla Black’s seductive new paranormal series.


Ex-Marine Caden MacTavish has shunned his magical heritage all his life, but he will do anything to heal his desperately ill brother, a Doomsday Brethren warrior in mourning for his missing mate. Posing as a photographer, Caden must convince firecracker tabloid reporter Sydney Blair to reveal the source of her recent exposé on a supernatural power clash. Unfortunately, keeping his hands off the sizzling redhead proves as hard as getting them onto the potent and mystical Doomsday Diary he discovers at her bedside. A bloody rebellion led by an evil, power-hungry wizard is imminent. If Sydney divulges the book’s existence, she will jeopardize magickind’s most deeply guarded secrets and become the ruthless wizard’s number one target. Caden has never trusted magic’s cruel and dangerous powers, but he will protect Sydney with his life and magic—even if it means risking his heart.

You can go here to read chapter 1:http://www.shaylablack.com/seducemeinshadow.html