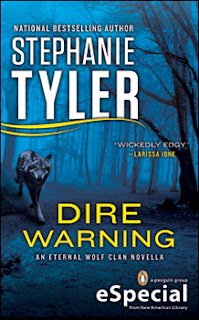 In Stephanie Tyler's new Shifter series novella Dire Warning, we are introduced to our Dires Wolves, Alpa Dire Rifter, Vice, Jinx and Stray along with Weres the Dires have "adopted" Cyd and Cain. The Dires have taken it upon themselves to be the protectors between the human and Were population and to make sure that the Shifters remain unknown to humans.

It's Valentine's Day and Dire Alpha,  Rifter and the other Dire Wolves are out because Rifter has an inkling that some trouble is in the air. He walks into the bar Bite to find human and Weres alike mixing, which is not an ideal situation.

Nothing much but a bar fight actually happens while at Bite, but afterwards they find there was a murder of a human female reportedly done by a "werewolf". The murder itself evidently was caught on tape by a paranormal medium, who is now hiding said tape.

Rifter and his Dire Wolves set out to find out who killed the human female, who's ghost has now attached herself to Jinx and Vice. The main suspect being Bill, the medium who was Paula, the murdered female's boss and friend. Or was he?

What a great introduction for a very hot series! Weres are very hot and these bad boy bikers don't disappoint. Stephanie's new and innovative look at the mythical beings captures your attention from the get go and doesn't let go. I hope you all enjoy this great new story in the Eternal Wolf Clan series by Stephanie Tyler as much as I did. Release date for this novella is February 7, 2012.