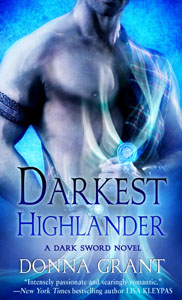 Finally Broc, our winged warrior gets his day in the sun! We begin Darkest Highlander where Shadow Highlander ends. The evil Deirdre is still wreaking havoc and suddenly Sonya is missing. The Druid, Sonya is lamenting the disappearance of her powers. Feeling useless to the the ones that need her at MacLeod Castle she goes off on her own. When it is found out by the MacLeod that she is gone, Broc is sent to find her.

Broc has been looking after Sonya and her sister for most of their lives. As she grew to womanhood Broc's feelings for the beautiful Druid evolved into desire. Alas it's a desire that he doesn't want to pursue for fear of being Sonya's downfall. After saving Sonya from a wolf attack he goes off with he only to unknowingly place her into the hands of Deirdre's evil henchman. Broc must save Sonya from Deirdre and most of all from herself as she becomes doubtful of her abilities, especially the ability to speak to the trees.

Broc and Sonya eventually set out to  find an artifact that could very well either help or hinder in the maintenance of the warriors way of life. Of course, Deirdre and her army of wyyran on hot on their tails attempting to reach the artifact before it could be used by the warriors and the MacLeod.

A back-story here is that of Malcolm who also leaves the protection of the MacLeod holding. After losing use of an arm he knows he will never be Laird of his clan and also feels useless. The path Malcolm chooses to take will shock the reader.

All the trials an tribulations of Broc and Sonya's journey come to a head when the unbelievable happens. Something so shocking that the reader isn't even prepared.

I was waiting with bated breath for this book. Broc is one of my favorite warriors and he had to be paired of course with Sonya. Their story is one of extreme desire and need. I was very happy with this book. By now all the warriors and their females are like old friends and we root for each and every one of them. At first I was sorry with the knowledge that this is the last in the Dark Sword series, but once again Donna Grant surprises us and  hope springs eternal for the next series Dark Warriors. I know you will enjoy Donna Grant's Darkest Highlander as I did. Donna's passion for her warriors shines through and brings you into the MacLeod world until you become part of it.

5 Stars (Hook Line and Sinker)
Posted by Kimberly Rocha at 7:12 AM