The Brotherhood of Blood ~WOLF HILLS~ by Bianca D'Arc 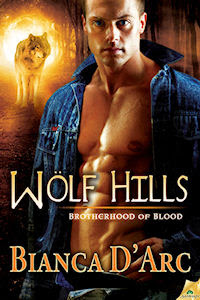 Detective Sally Decker is the last of her college study group girlfriends to settle down. When she goes on vacation to visit one of her best friends, Carly and her new husband Dmitri in Wyoming, she's surprised at what she finds . From the get-go, Sally sees that all is not as it seems, being surrounded by inhumanly tall,  muscular males and tall beautiful females. Then walks in Alpha male, Jason Moore, throwing Sally completely for a loop.

When Carly and Dmitri confess that they are Vampires and that gorgeous Jason is the Alpha of the local Werewolf pack, Sally is taken aback until she's quickly given a demonstration. Unbelievably accepting of the confessions she's just heard, Sally becomes fascinated with her surroundings, especially Jason Moore.

As soon as Alpha werewolf, Jason sees Sally he is drawn to her. Not only because of her confidence and her apparent  strength, but because something else unknown about her tweaks his interest. When a plot by an group of evil hunters threatens the lives of Were children, Sally throws herself into helping Jason and the Werewolf pack keep them safe. Sally's mix of beauty and determination quickly enthralls Jason into thinking that maybe Sally would be the perfect Alpha female for him, though Sally is convinced that at the end of her two week stint in Wyoming, she will be returning to her old life. That may or may not be the case. You will have to read Wolf Hills to find out!

With action and attraction pretty much happening from the first sentence, Wolf Hills by Bianca D"Arc is a great read. I love how Alpha Werewolf, Jason decides what he wants and pretty much nothing deters him from his goal. Sally Decker is an amazing female with her gritty confidence and her knack of a cool head in times of distress. Wolf Hills is part of the Brotherhood of Blood series, but is fabulous as a stand-alone as well. I highly recommend Wolf Hills by Bianca D'Arc.