The Stranger Next Door by Chastity Bush 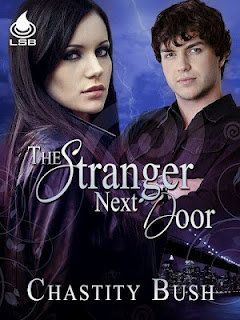 All Police officer, Tess McCoy wanted to do after the murder of her partner and best friend, Dean, was take some time for herself and figure out what she wanted to do with the rest of her life. She was still mourning for her best friend when she finally meets her mysterious neighbor across the street, Jack. The handsome, Jack turns out to be a private investigator who is taking an extended vacation for the very same reason Tess is on leave from the force.

Pretty much from the first look Tess and Jack have a connection, one they attempt to ignore. When strange happenings spurn Jack's having to move into Tess' home to protect her, the two are thrown together 24 hours a day and denying that attraction becomes almost impossible. Tess believes she shouldn't get involved with the delectable P.I. and he in turn has trust issues considering he investigates cheating spouses on a daily bases.

When an attempted kidnapping forces Tess and Jack closer than she may be comfortable with, she decides to throw caution to the wind and see where it takes her. At this time, Tess finds that people who she considers family, may be involved with the Mob and Jack doesn't entirely trust that she doesn't know about the entire sordid affair.

Denial puts Tess in danger, more than she ever could have imagined where people she thought were her friends turn out to be enemies. Can Jack get to her before Tess comes to irreparable harm? You'll just have to read The Stranger Next Door to find out!

An awesome read by Chastity Bush. She is so adept with suspense that I was sucked in immediately. Her twists and turns have one thinking one way then another. I loved this story and adored the fact that Chastity didn't just have Tess and Jack jumping into the sack together at first look. The gradual build and sexual tension was so apparent, that when it finally happens, you almost hear the sound of bells ringing. I highly recommend The Stranger Next Door and anything else on Chastity Bush's bookshelf.