The Alpha Brotherhood #1 ~ An Inconvenient Affair ~ by Catherine Mann 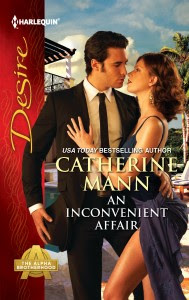 Hillary Wright is in a bit of trouble. Her knack for perpetually getting involved with the wrong man has landed her in a situation that takes her from her home and job in Washington D.C. to a flight headed for Chicago where she is to identify associates of her criminal ex-boyfriend who are involved in a money laundering scheme.

On the flight she meets a very attractive, too good to be true Troy. Knowing her luck for meeting the wrong man, Hillary fights her instant attraction to Troy and possibly with god reason. Meet Troy Donovan, rich, handsome and devious. When Hillary finds out Troy is none other than the infamous "Robin Hood Hacker" she figures she needs to stay far away from Troy. That isn't in the cards though.

Troy Donovan is working with the people that have brought Hillary to Chicago, and feels obliged to protect her until the criminals are caught, so he comes up with an elaborate plan to win her for a date weekend.
Exasperated but interested nonetheless, Hillary goes along with Troy's plan and in the process the pair become deeply involved although Hillary keeps the trust issue as the barrier between her and Mr. Donovan.

During this introductory tale we meet several members of the Alpha Brotherhood and find out where it all began and why. I very much enjoyed this Catherine Mann book. Believe it or not, An Inconvenient Affair is my first Harlequin Desire book. This story had enough intrigue and romance to keep me very interested. Catherine Mann is a great writer. I enjoy her work and I suspect the Alpha Brotherhood series will be a popular one. I mean who doesn't like steamy and mysterious stories with rich, handsome bad boys?

The Alpha Brotherhood ~An Inconvenient Affair ~ by Catherine Mann is available August 1, 2012

Posted by Kimberly Rocha at 6:12 PM