Sadie and her Cowboy by Paige Tyler 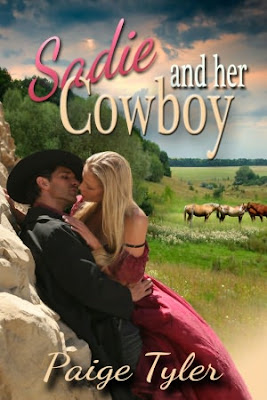 Rancher Sadie Buchanan is having big problems. Since her father's death she is being pressured by a neighboring cattle rancher to sell the property to him. That's the last thing Sadie would ever do! Sadie has seemingly made a few enemies in the Boone family, who are intent on making her property their own, if not by marriage than by devious means. When Sadie's temporary foreman, Ned, tells Sadie she needs help in the form of infamous gunslinger, Jake Wagner, she hesitantly agrees to see what the man can do.

When the rugged and striking gunslinger, Jake Wagner receives a message that his help is needed at the Buchanan ranch, he heads on over. When Sadie and Jake come face to face, all things are not as they would seem. Jake finds Sadie to be a tad spoiled but very much interested in the cowboy. Unfortunately he has a rule about bedding the bosses, even if they're as beautiful as Jake finds Sadie. Only thing is, he hasn't met anyone as persistent as Sadie. Doubtful he ever will again.

Not only is Sadie persistent in her pursuit of Jake, she is also persistent in the fact she wants to hold onto and make her ranch prosper, even if that means she has to put herself in danger an accompany the cowpokes and Jake on a possibly perilous cattle drive. As for her attraction to Jake, she finds she has a penchant for being disciplined by the dominant Jake, and honestly, who can say no to Jake? If you want to find out how all ends with Sadie and Jake, you will just have to have a gander at Sadie and her Cowboy by Paige Tyler.

I really enjoyed this story. I like how Sadie can hold her own as well as be submissive when necessary. I love how Jake just exudes dominance but also caring. Sadie's need to take care of her ranch and all that depend on it makes her such a lovable character and Jake's understanding of what Sadie need is perfection.
I highly recommend  Sadie and her Cowboy, it's a great read with some pretty hot lovin' going on!