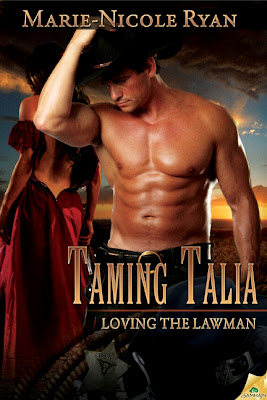 As Natalia Montrose stands over the grave of the husband who died in a brawl in the local saloon in the company of a soiled dove, she does not lament his death. In fact, she breathes a sigh of relief. You see, her marriage was no happily ever after. Her father made a deal with Reginald Montrose that included the property and Natalia in exchange for making Natalia's father a wealthy man. Being that Reginald wanted the property badly, he agreed to Natalia's father's terms.  Throughout her eight year marriage to the Anglo, Reginald Montrose, Latina Natalia was abused verbally and physically and while of course it was awful when he died, Natalia wasn't going to hide behind widow's black mourning for him. Au contraire, Natalia sets out to bed the first man she sets her sights on.

Jared Fields, a Pinkerton agent from New York has been given the task of investigating the death of Natalia's husband by the deceased's wealthy father in New York, who believes that Natalia had a hand in the death. Jared Fields is supposed to either bring Natalia to justice or take her back to New York if there was a child involved. Jared Fields is a disinherited Easterner who decided the only way to make a living was to work for the Pinkerton Agency. The handsome thirty something had no idea what he was getting himself into when he strolled on in to New Mexico.

Once Jared meets Natalia Montrose, he doesn't know what to think of the beautiful raven-haired woman, he dubs Talia, and quickly, sparks fly between the two when a freak snowstorm has the holed up in her home.When the passionate Talia finally gets all the loving she finally needs, will she realize their is more the it than just the sex? Will Jared's being a Pinkerton agent come between he and Talia? Finding all this out and much more is all the fun when you pick up Marie Nicole Ryan's Taming Talia.

I really enjoyed Taming Talia by Marie Nicole Ryan. I like how the heat set in rather quickly and didn't fizzle out at all. I loved how Talia was no shrinking violet and Jared to give as well as he could take. This plot was very interesting and the characters completely believable. This was my first book by Marie Nicole Ryan and I already have jumped into the first book in this series, Seducing the Sheriff. I am looking forward to more great stories by Marie Nicole and I think you will like them as well.

Posted by Kimberly Rocha at 7:04 PM