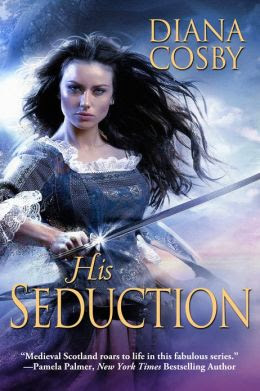 When Scottish Lady Rois Drummond believes her father, The Earl of Brom is about to be accused of treason to the Englishman Sir Griffin Wescott she steps forward and accuses Griffin of compromising her to deflect from the politics. What Rois doesn't think will happen ultimately happens when Griffin offers for her hand, knowing she is a liar and hoping she will speak the truth before the vows. Hmmmm and the plot thickens when Rois sticks her her lie and ends up Griffin's wife.

Rois goes into the marriage believing the worst about her new English husband, but soon realizes that her preconceptions were wrong. Sir Griffin not only is an honorable man, but he may just be the love of her life. Shame that it is that Rois simply can't tell the truth to her husband, but Griffin has secrets of his own. The politics of the time lead to a story filled with suspense, the romance is is passionate and real.

Rois comes off as impetuous and immature at first but evolves into a confident and honorable heroine. Griffin is the dream hero from the first page. He of course has his issues, but her always treats his woman with respect and understanding, even when he know she isn't forthcoming with him.