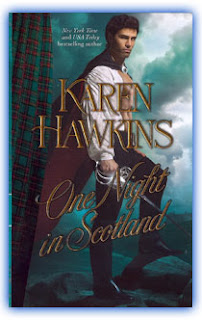 I have to begin by saying that Karen Hawkins is one of my new favorite authors. She tells a great story and is clever and witty. I began by reading Much Ado About Marriage and then went on the read her MacLean Curse series, all of which I enjoyed immensely. So as soon as I finished The Laird Who Loved Me, which by the way is an awesome book, I started One Night in Scotland.
One Night in Scotland begins the Hurst Amulet series..Mary Hurst is sister to Caitlyn and Caitriona Hurst-MacLean, twin sisters who married two of the MacLean brothers. Mary has been at home caring for her parents, most of her siblings gone, making their way in the world. Brother, Michael Hurst, after having spent much of his youth sheltered at home due to maladies has become a renowned Egyptologist who travels in search of ancient artifacts. His true quest is to recover the Hurst Amulet which disappeared from his ancestors hands during the time of Queen Elizabeth I. Mary receives a missive from her brother that says he is being held as a "guest" (hostage) in Luxor, Egypt, in exchange for an artifact delivered to the Earl of Errol.
Michael pleads with his family to re-acquire the artifact from the Earl of Errol. As Mary is the only person at home and able to do Micheal's bidding, she sets off to Aberdeenshire, Scotland where in an inn she  meets Angus Hay, the Earl who unbeknownst to her, is posing as a common footman. Angus Hay (the Earl of Errol) takes Mary and her servant to New Slains Castle where she requests and audience with the Earl.
Mary finds her meeting with the "Earl" a bit off. Posing as the Earl is Angus Hay's cousin, Neeson Hay. Mary tells the men her plight, but they don't believe her. In fact, once Angus reveals himself has the real Earl, he insists Mary remain in New Slains Castle until her identity can be verified. When Lord Hay has Mary confined to a room as a virtual prisoner, she creates mischief in order to be let out of her confines. She will try almost anything to help her brother out of his predicament.
During her stay at New Slains Castle, Mary and Angus get to know each another, they find they have many things in common, including an attraction to one another, but the Earl of Errol has a tormented past. Will he be able to let go of his past and let Mary Hurst into his heart? Find out by reading One Night in Scotland.


Branded a thief and held prisoner in a Scottish castle high upon a cliff by the dark and forbidding Earl of Erroll, Mary Hurst must find a way to free herself and gain possession of a mysterious artifact that can help her beloved brother regain his freedom.
Fortunately, Mary is no simple, schoolroom miss and the handsome earl is about to discover that spirited women do not take kindly to being imprisoned. Forced to deal with his recalcitrant (and he’s certain, devious) guest, Erroll finds himself reluctantly admitting that if he weren’t so sure she was a thief, he might be interested in the intrepid Mary. Might be, he reminds himself after he kisses her yet one more time . . .
Before Mary’s done, the earl will wish he’d never turned the key upon her door . . . and wonder if perhaps she really is a thief, and has stolen his heart!