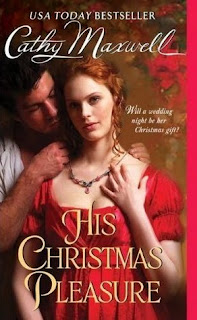 I was very excited to read this book after taking a glimpse of the back cover.This is the first book I've read by this author and I will absolutely read more by Cathy Maxwell. In  His Christmas Pleasure, we begin in London in 1810 with  Miss Abigail Montross, a pretty twenty-something who has had her share of problems with men. At a party at the Banfield home, she happens upon  the handsome Andres, Baron de Vasconia, a supposed aristocrat from Spain,  in the library of the Banfield home with a pistol to his head. Believing the Baron is about to commit suicide, she throws herself at him to dislodge the pistol from his hand. When they begin a conversation, still on the floor of the library behind a sofa, they are interrupted by Freddie Sherwin.
Abby believes she is in love with the Lord Freddie Sherwin. Freddie enters the library to find Abby apparently to him alone. He tells her this evening the Lord Banfield is to announce Freddie's betrothal to Celeste, Abby's cousin. Abigail is shocked and upset, she tries to change Freddie's mind, but he is fixed with the decision to marry Celeste. He tells Abby that although he loves her, he must marry her cousin. He also adds that while he will marry Celeste, he could always take Abigail as his mistress.An outraged Andres hears the entire interlude and so begins this awesome story.
Andres and Abby end up eloping and moving to an estate in Northumberland , far from London, into a home that Andres acquired through the jealous husband of a Lady Andres had a brief interlude. The catch is Andres is never to return to London. Abby begins her marriage knowing Andres has taken her for her money, and she is fine with it since the alternative to it was an arranged marriage to a much older man with thirteen children. Once the ceremony is done and the marriage consummated, they come face to face with Abby's father, a very rich banker, Heath Montross. Mr. Montross has been hot on their tale since the minute he finds out Abigail's intentions.
When Abigail sees her father he is angry with her and wants her to return to London. When she refuses to go with her father, he cuts her off financially and tells her that the inheritance that her grandmother left her has been changed to a trust and she will not be able to touch any of the money for three years. Instead of sending her back with her father, Andres takes her to their new home in Northumberland where they find all things are not as they thought they would be.
I loved this book!!! It's a great story with awesome characters. I felt for both Andres and for Abby. It definitely shows what happens when two people fall in love and neither is able to admit it. I highly recommend it for Christmas and for any time of the year!