Day 2 of the Twelve Books of Christmas- A Very Gothic Christmas Novella: After the Music by Christine Feehan 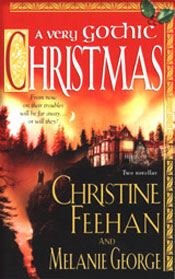 Christine Feehan is one of my favorite authors. I have read every one of her books and series and I find them all intriguing and well written. A Very Gothic Christmas: After the Music is a great story about former musician Dillon Wentworth, his twins, Tara and Trevor and their guardian Lisa Fitzpatrick.
Before the fire which took Dillon's wife, the mother of his children, Dillon was a world famous musician/composer in a band. After the fire disfigured him, he cut himself off from the world and his children. Jessica Fitzpatrick is the daughter of Tara and Trevor's nanny and was 18 at the time of Dillon's wife's death. After the fire, Mama Rita and daughter Jessica took care of the twins as if they were their own, until Rita's untimely death.
We begin the story with Jessica and the now 13 year old  twins traveling by boat in an awful storm to Dillon's island off the Washington and Canadian coasts. Dillon has no idea Jessica is bringing his children home for Christmas. He hasn't seen them since the fire. Jessica has been doing her best to raise the kids, but when strange things begin to happen, she feels the need to involve Dillon.
When Dillon finally sees his children and Jessica for the first time in seven years, he is surprised and conflicted. Before the fire, Dillon was very attracted to the young Jessica, and seeing her again only cemented the attraction. Being burned over much of his torso, Dillon is uncomfortable with anyone seeing the burns, especially his children.
During their stay with Dillon strange things begin happening there as well and a mystery must be solved. Dillon must also come to terms with his life as it should be, not as he's been attempting to live for the past seven years.

~KIMBERLY~
Posted by Kimberly Rocha at 7:28 AM