How to Capture a Countess (the Duchess Diaries) by KAREN HAWKINS 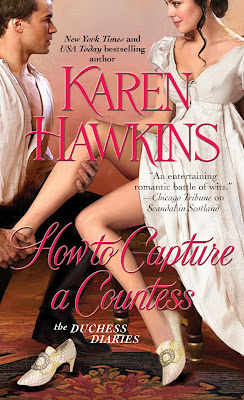 Sixteen year old, Rose Balfour embarrasses her crush, Lord Alton Sinclair, AKA Lord Sin, by accidentally pushing him into a fountain after he gives the young lady a shocking first kiss. The handsome rogue, unused to being laughed at by his peers who dub him Lord Fin for his swim in the lily pad stocked fountain, blames Miss Balfour for his embarrassment.  Six years later, Lord Sin still seeks revenge from the humiliation he has endured since the incident.

Lord Sin's aunt Margaret, the Duchess of Roxburghe, just happens to be Rose's Godmother. When Sin finds this little tidbit out, he insists that Aunt Margaret invite his nemesis, Rose to one of  Margaret's famous yearly house parties, so he can commence his revenge. Once the Duchess meets her Goddaughter she is convinced that Rose will be a match for the stubborn Lord Sin. Noting that not one woman has ever raised Sin's ire as much as this unconventional girl, the Duchess teeters between throwing the two together and keeping them far apart during their stay in her home.

Soon enough, Sin realizes that there is so much more than he originally thought about this exasperating female, he can't decide whether to seduce her or strangle her. When he informs Rose of his plan to seduce her, Rose insists she can keep Sin at bay, But does she want to? So commences a three week long seduction that has Sin and Rose running circles around one another all in view of Duchess Margaret's guests who are an interesting cast of characters, and not the usual company at the Roxburghe residence.

Rose wishes to make peace with her past so as her sisters have a fair chance at finding husbands, Sin wishes to show Rose who has the upper hand in their budding relationship and Aunt Margaret wishes to give her troublesome nephew a lesson he won't ever forget. That and much more sets the tone in How to Capture a Countess, the first installment in the new Duchess Diaries series by the ever-talented author, Karen Hawkins.

Oh how I love this book! Yes, I am a rather huge Karen Hawkins fan. Her Regencies were the first of that genre that I read. Her humor, her eclectic but lovable characters keep me coming back for more.Rose's nervous habit of laughing when something serious happens gets her into some trouble and is something I can completely relate to. Watching Lord Sin evolve from a self absorbed brat to a man head over heels in love is an exciting journey I think all will enjoy.

I adore the meddling Duchess Margaret's journal entries at the top of every new chapter.  They make you feel an intimate part of the goings-on , add humor and something to think about as the next chapter is begun. The Duchess of Roxburghe finds a new hobby of matchmaking which I am eager to see in the next Duchess Diaries books. Her knowledge that her nephew is not perfect, not making excuses otherwise and her ability to reason with those around her makes her one of my favorite characters.

How to Capture a Duchess by Karen Hawkins is a fabulous read and I highly recommend it. I can't wait to see the Duchess of Roxburghe's upcoming machinations. 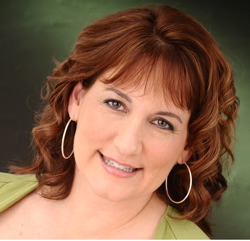 Posted by Kimberly Rocha at 3:41 PM